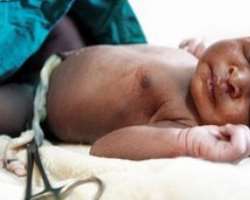 Waiting a few minutes after delivery to cut the umbilical cord is best for a newborn's health, research suggests.

Delaying cord clamping reduces the risk that the baby will have iron deficiency anaemia without substantial side effects, the authors told the BMJ.

The World Health Organization dropped early clamping from its guidelines some years ago.

But there are no formal guidelines for NHS staff about when the cord should be cut.

An audit a few years ago found many UK hospitals advocate early clamping, as soon as the baby is delivered.

Blood boost
Mounting evidence suggests this may not be best practice and could be causing health problems.

Globally, about a quarter of preschool children have iron deficiency anaemia, the most severe form of iron deficiency. In Europe, the prevalence is 3-7%.

This is a significant health problem because it can harm a child's brain development.

A simple solution, say researchers, is to ensure babies get the best start in life by maximising the blood and iron stores they get from the placenta.

Waiting three minutes before clamping the umbilical cord at birth can boost a newborn's blood volume by a third.

In the latest study, experts in Sweden looked at the outcomes of 400 babies born after a low-risk pregnancy.

Some had their umbilical cords clamped after at least three minutes and others had them clamped in less than 10 seconds after delivery.

And there were no obvious adverse health effects, despite previous concerns raised by researchers about the possibility that delayed clamping could make the baby jaundiced.

The researchers estimate that, for every 20 babies having delayed clamping, one case of iron deficiency would be prevented.

They say that delayed cord clamping “should be considered as standard care for full term deliveries after uncomplicated pregnancies”.

The Royal College of Obstetricians and Gynaecologists (RCOG) has no specific recommendation on when the umbilical cord should be clamped, but its scientific opinion paper admits: “Immediate cord clamping became routine practice without rigorous evaluation.”

It calls for more research into the area: “Iron deficiency in the first few months of life is associated with neurodevelopmental delay, which may be irreversible. Whether increasing placental transfusion by deferring cord clamping will improve neurodevelopment in early childhood is not known but this hypothesis should be tested in large randomised trials.”

Patrick O'Brien, of the RCOG, said the weight of evidence to support delayed clamping was growing and that many more hospitals in the UK were adopting the practice.

“The college will look at this and other evidence and consider if it is enough to change policy.”