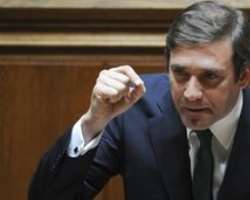 Portugal's prime minister has arrived in oil-rich Angola, which is boosting its investment in its former colonial power caught up in the eurozone debt crisis.

The International Monetary Fund has ordered Portugal to sell state companies to qualify for a bailout.

Angola's investments in Portugal have risen sharply in recent years.

Angolan companies own the equivalent of 3.8% of companies listed on Portugal's stock exchange, from banks to telecoms and energy, it says.

'Very welcome'
Angola is Portugal's fourth biggest trading partner and its largest outside the European Union. Portuguese goods account for nearly one fifth of all Angolan imports.

The IMF has agreed to give Portugal a $107bn bailout on condition that it introduces a wide range of economic reforms – including privatisation.

However, anti-corruption campaigner Rafael Marques says Portugal should be careful about accepting money from Angola, where corruption is endemic.

“The Portuguese should be asking questions about where this money is coming from,” he said.

“If they don't ask these questions, they risk Portugal becoming a Laundromat for Angola's ill-gotten gains.”

“Many Angolans have business interests in Portugal, but also a lot of Portuguese people are here in Luanda making business, so I would say it's a reciprocity which is good for both countries.”

Mr Passos Coelho told the Journal de Angola newspaper that Angolan companies would be “very welcome” to buy shares in state-owned companies targeted for privatisation, though none had shown an interest so far.

Portugal was committed to strengthening bilateral ties with Angola, he is quoted as saying.

“I can't think of anywhere where it has happened like this,” he said.

“I am sure we are going to see a lot more Angolan purchases of Portuguese assets in the near future.”

The family of Mr Dos Santos – who has been in power for 32 years – controls a large chunk of Angola's economy, while most Angolans live in poverty.

Mr Dos Santos' daughter Isabel is known to have a large Portuguese portfolio, as does the state oil firm Sonangol, our former correspondent says.

This will be Mr Passos Coelho's first visit to Angola since he was elected to office in June.

He grew up in Angola, where his father was a doctor during the colonial era.

Angola gained independence from Portugal in 1975.