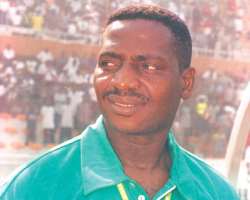 Ogedegbe, one of the heroes of Nigeria's first victory at the African Nations Cup, which the country hosted and won in 1980, was confirmed dead at about 7.50 pm last night at the University Teaching Hospital, UCH, Ibadan following an eye operation recently.

The former national goalie was receiving treatment after being in coma at the UCH since last week. The late goalkeeper's wife, Shade was said to have broken down in tears when some of his colleagues told her of his deteriorating condition.

His death came just as the Nigeria Football Federation, NFF was planning to do everything within its limit to save his life.

Just yesterday, his close friends made clarion calls to the Lagos State Governor, Babatunde Fashola and other Nigerians to rally round the former IICC of Ibadan goalkeeper, but the outcry came too late.

“If it meant taking him abroad for further treatment, the NFF is ready to do that. But as a body, the NFF must wait for the recommendation from doctors at the University Teaching Hospital (UCH), Ibadan,” the NFF was quoted as saying yesterday.

His wife, Mrs Ogedegbe, who works at the BCOS, Ibadan, said “My husband had been in coma since Wednesday, but the doctors told me that another round of tests would be conducted last Sunday.

“But, he is gone, he's ….” the weeping wife of the deceased football icon broke down early today.

A member of the then IICC team that won the defunct African Cup Winners Cup in 1976, Ogedegbe also played for the late MKO Abiola's club.

His last job as goalkeeper's trainer was at the Sharks Football Club of Port Harcourt, where he was Kadiri Ikhana's assistant.

His corpse has been deposited in the UCH mortuary.