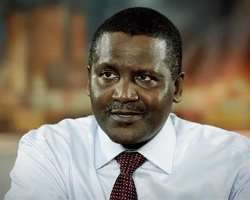 Aliko’s estimated fortune was put at $10.1 billion USD based on his stake in Dangote Cement, a company listed on the bourse with operations in other countries in Africa, as well as his holdings in sugar, flour and salt manufacturing companies.

Behind him at number two is South African diamond magnate Nicky Oppenheimer, with a $6.5 billion fortune.

Forbes said its “inaugural list of the 40 Richest People in Africa is a testament to the growing global importance of the continent. Fortunes are being created everywhere from South Africa clear north to Morocco and Egypt in a diverse array of industries, by companies that cater to local tastes or worldwide needs.”

A breakdown of the numbers shows Egypt with seven (7) billionaires mainly from two families – Sawaris and Mansours. South Africa contributed 4 while Nigeria contributed 2 billionaires with the President of Globacom, Dr. Mike Adenuga emerging the fourth richest with $4.3B. Six (6) other Nigerians were listed as millionaires.