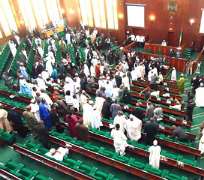 ABUJA, November 15, (THEWILL) - Rowdiness characterized today’s sitting of the House of Representatives as members openly expressed their anger as Speaker Aminu Waziri Tambuwal appointed a five member committee to study a bill seeking to make provision for the sharing of proceeds from some taxes collected by the Federal Inland Revenue Service (FIRS) to state governments.

Sponsored by Hon. Marouf Akinderu-Fatai (ACN, Lagos), the bill seeks to amend section 163 (b) of the Constitution by stipulating a time frame by an Act of the National Assembly for the federal government to pay back to the states taxes and duties it collected on their behalf.

It is titled “A bill for an act to provide for the distribution and payment to state governments of some taxes and duties collected by the Federal Inland Revenue Service (FIRS) or other authorities of the Federal Government and other matters connected therewith.”

But disorder and shouting emanated shortly after Speaker Tambuwal was in the process of inviting the sponsor of the bill to lead the debate for second reading, when Hon. Kamil Akinlabi (ACN, Oyo) raised a point of order insisting that the bill should not be taken but instead referred to the Committee on the review of the Constitution for relevant actions.

In his argument, Akinlabi said that the bill should not be discussed because it runs contrary to the provisions of section 80 (1), (2), (3) and (4) of the Constitution.

According to him, any law that is passed and is at variance with the provisions of the constitution is null and void and he therefore advised the sponsor of the bill to re-present the bill as a constitution amendment bill.

According to Gbajabiamila, there was no conflict between the bill and the Constitution. He explained that it was necessary to put a time frame that will ensure that states receive in a timely fashion taxes and duties collected on their behalf by the Federal government.

He explained that section 163 of the constitution stipulates that taxes and duties should be distributed on the basis of derivation and that it shall be considered as the consolidated revenue of the states. He therefore submitted that the bill was in line with the constitution.

It was at this point that rowdiness enveloped the chambers with most members angling to voice out their positions. The Deputy Speaker was shouted down by some of the members who were not comfortable with his submission.

Many members shouted at the top of their voices against the position taken by the Deputy Leader.

Chairman of the committee on environment, Hon. Uche Ekwunife (APGA, Anambra) in her submission supported Hon. Akinlabi’s position that the bill be discountenanced. Her presentation was welcomed by most members.

However reading the countenance of majority of the members, the Speaker, Aminu Tambuwal intervened. He said it was obvious that the bill was contentious.

“Because of the conflict this bill has brought, I think we should constitute a small committee that will look at the bill and advise the House accordingly.”

Even as Tambuwal was calling out names of the committee members, he was interjected by members who shouted in apparent disapproval. However, the noise did not stop the Speaker as he named the deputy leader, Leo Ogor, minority leader, Femi Gbajabiamila and the chairmen of the House committees on rules and business, Hon. Albert Sam-Tsokwa, justice, Hon. Ali Ahmed and judiciary, Hon. Aminu Shehu Shagari as members of the ad hoc committee.