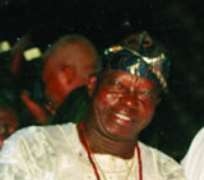 THE birthday ceremony of Lere Paimo, was shunned by young and upcoming actors and actresses as many of them were not at the event to add glamour to it.

NFC learnt that the absence of Saheed Balogun, Yomi-Fash Lanso, Femi Adebayo, Funke Akindele, Iyabo Ojo, Fathia Balogun was linked to the recent death of Late Monsurat Omidina, popularly known as Moladun, claiming that the actress was yet to reach the mandatory forty one days.

Not withstanding, Olalomi Amole and Akomolafe Olaiya were on hand to entertain the guests who filled Genesis Hall to the brim.

The Oyo State Governor, Otunba Adebayo Alao-Akala, was represented by his Chief of Staff, Chief Saka Balogun, who described Lere Paimo as the man of the people who has brought development to the movie industry.