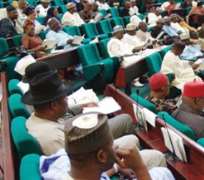 By InALEGWU SHaiBU
ABUJA - SENATORS returning from the Eid-el-Kabir holidays were, yesterday, in angry mood with President Goodluck Jonathan over the security situation in the country lamenting what they described as his inability to protect lives and property.

A bid by some senators to instigate a vote of no confidence on the President was, however, forced down by the President of the Senate, Senator David Mark, who with the assistance of the Senate leadership mollified the angry senators.

Senator Mark was pushed to promise a face to face meeting with the President on the issue as a way of mollifying the anger of the senators. Senators who spoke during the closed door session to address the insecurity caused by activities of the Boko Haram group flayed what was described as the incompetence of government officials to arrest the situation.

The senators observed what they described as the extended time it was taking the government to decisively stop the killings and destruction of property through terrorist activities.

A source told Vanguard that Senate President, David Mark who presided over the close door session had to calm the senators down and assured that the best way out of the insecurity situation is for the Senate to have a face to face meeting with Jonathan to get first hand information on the activities of government towards tackling terrorism.

Beside the two hour closed session, Senate Committees on Defence, Police Affairs, Navy, Air Force, National Security and Intelligence and Interior also held another special meeting after the close of plenary session with focus on engaging the security chiefs on the ways to address the problem of terrorism.

Security situation
Chairman, Senate Committee on Information, Media and Public Affairs, Senator Enyinnaya Abaribe who spoke to journalists at the end of yesterday's sitting said the session offered the Senate time to review security situation in the country and efforts made by government to address the problems.

He said: 'The executive session was mainly concerned with matters of national security. All of us are aware of the situation of things today in Nigeria and we want to also let you know that the National Assembly will continue to engage with the executives with regards to national security.

'I think the discussion is on-going to ensure that each and every one of us lives in Nigeria that is free from the current problem that we are undergoing and we hope that every Nigerian will be more concerned about our security and that is exactly what we are doing.'

Senator Abaribe added that the meeting also involved reappraisal of methods used by the security operatives and issues of equipment for dealing with the new trend of terrorism.

He noted that the Senate also discussed the need to change the format of security machinery in the country and to replace them with highly sophisticated ones.

Abaribe said: 'This discussion has been on-going and part of what we did today at the executive session was a review of all these measures that are being taken. I do not think that any measure that is being taken is taken very lightly. I think that the security agencies are doing good jobs. I don't think they only look under the cars, they also look at the booth, sometimes asking you to step out and they open the bonnet and check everything.

'I think also that there is an ongoing review which means that the measures will continue to be upgraded and improved with time. We are asking for a little patience and we know that things will get better. This is a new phenomenon that has just come to Nigeria and I am sure that the security agencies will handle the situation with time,' he noted.

He confirmed that the various committees of the Senate would engage the security agencies for further discussions and report back to the Senate.

'The fact that we had an executive session and spent all this time is better than a motion because at a public debate, everything comes out. We wanted to have a full and quiet discussion on security matters and that you cannot do in front of cameras.'