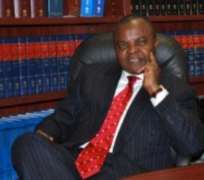 Justice Christopher Balogun of the Lagos State High Court sitting in Igbosere has remanded a US based Nigerian lawyer, Emeka Ephraim Ugwuonye pending the hearing of his bail application following his arraignment on Tuesday November 15 , by the

Economic and Financial Crimes Commission, EFCC for alleged stealing and diversion of a client's fund.

Ugwuonye pleaded not guilty to a 2-count charge preferred against him by the EFCC. Counsel to EFCC, Festus Afeiyodion then told the court to fix a date for the trial as the Commission was ready to commence trial.  But counsel to Ugwuonye, Bamidele Aturu asked the court to look into his bail application as he claimed that the defendant had been in the custody of the EFCC since October 26. But the EFCC counsel countered that the Commission had filed a counter-affidavit opposing the request for bail. â€¨â€¨The Judge thereafter proposed Friday this week for a hearing of the bail application. But the EFCC's lawyer informed the court that he will not be available on Friday due to a prior commitment.  Aturu urged the EFCC's counsel to be flexible on the ground that  Emeka is a fellow counsel. Thursday November 17 was subsequently agreed for hearing of the bail application.â€¨â€¨ Aturu further pleaded with the Court to order that Emeka be remanded in the EFCC's custody claiming that the Kirikiri prison's conditions would be too harsh for his client. He told the court that "those of them who had been to Kirikiri know that it is not a funny experience".

Justice Balogun thereafter adjourned the case to Thurday this week and ordered that Emeka be remanded in EFCC's custody as requested by his lawyer.  Justice Balogun adjourned to November 17 while fixing January 24, 2012 for the commencement of trial.

The embattled lawyer  is already facing two criminal cases before a Federal High Court and an FCT High Court, Abuja .Tthe EFCC on Wednesday October 26 opened one of its cases against Ugwuonye before a federal high court, Abuja over failure to declare his assets during investigations into the alleged diversion of $1.5 million USD federal government fund.â€¨ â€¨At the resumed hearing of the case, prosecution counsel, Festus Keyamo called the first  and only prosecution witness Abdullahi Idris Alaiya to the dock to give evidence through which the prosecution tendered three documents namely: the petition  from the Nigerian Ambassador to the US, Prof Ade Adefuye, the voluntary statement the accused wrote while in the custody of the EFCC and the blank declaration of assets form which the accused refused filling while in custody.

The trial judge, Justice Adamu Bello had admitted all the documents as exhibits in the case and adjourned the matter to the 16th of December,2011 for cross examination of the witness by the defence. When the $1.5 million fraud case came up at the FCT high court , Abuja , the matter was adjourned to January 26th 2012 for hearing.â€¨Ugwuonye's latest trouble started following a petition by one of his clients alleging that sometime in 2007,the embattled lawyer collected the sum of $94,948.00 (Ninety Four thousand, Nine Hundred and Forty eight US Dollars) on behalf of his client then, Sola Adeeyo. Rather than remit the funds to Adeeyo, he was said to have converted the said amount to personal use while all efforts to make him refund the money to his client proved abortive.