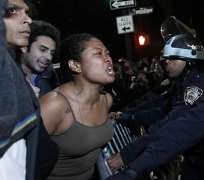 A judge upheld New York City's right to evict Occupy Wall Street protesters from a park on Tuesday after baton-wielding police in riot gear broke up a two-month-old demonstration against economic inequality.

Protesters who had been kicked out in a surprise predawn raid were allowed back 16 hours later but were banned from bringing the tents and sleeping bags that had turned a square-block park near Wall Street into an urban campground the past two months.

The judge ruled merely that the case lacked the urgency to approve or strike down the new park rules immediately. The underlying case will be heard at a later date.

After the judge's ruling, police lifted barricades at two points, letting people back in one by one. Several hundred protesters were in the park under a light drizzle, and the crowd thinned as the night wore on. The mood was largely free of tension.

Demonstrators have occupied the park since September 17 to protest what they see as an unjust economic system that favors the wealthiest 1 percent at a time of persistently high unemployment. They also decry a political system that bailed out banks after reckless lending sparked the financial crisis.

Mayor Michel Bloomberg ordered the eviction, saying the square-block Zuccotti Park had become a sanitation hazard and a fire trap.

The decision angered members of a movement that has spread throughout the United States and the world, and it came two days before demonstrators planned to shut down Wall Street outside the New York Stock Exchange.

"He's a billionaire and he's defending his class. He is the 1 percent," said Naomi Brussel, 69, retired social worker from Brooklyn.

Hundreds of police stormed the camp around 1 a.m. and dismantled tents, tarpaulins, outdoor furniture, mattresses and signs, arresting 147 people, including about a dozen who had chained themselves to each other and to trees.

The New York Civil Liberties Union said it was "deeply concerned" about the police department's "heavy-handed tactics" and said seven journalists covering the events were arrested.

While the park was cleared of protesters, sanitation workers blasted the square with water cannons, erasing odors of urine and human waste.

"His (Bloomberg's) response makes him seem completely out of touch to me and he comes off as a benevolent dictator," said protester Douglas Paulson, 31, an artist from the New York City borough of Queens.

In London, authorities said they were resuming legal action to try to shift anti-capitalism protesters who have set up camp at St Paul's Cathedral.

Toronto officials also told protesters to break camp and leave on Tuesday. In Los Angeles, city officials have opened talks with some members of the Occupy L.A. group to work out a timeline for moving their encampment from the lawn surrounding City Hall, where about 500 tents are standing.

BLOOMBERG'S CALCULATION
Bloomberg, a self-made billionaire whose wealth made him a target of the protesters, ordered the eviction at the request of the park owner, commercial real estate company Brookfield Office Properties.

The mayor's loyalties have been divided since the protests began. Socially liberal and a supporter of free speech rights, Bloomberg is also a former Wall Street trader who made a fortune selling news and information to the financial industry through his eponymous company, Bloomberg LP.

He has two years left on his third and final 4-year term.

But Bloomberg also pleased his allies on Wall Street and neighbors who had grown tired of the protest.

"It's made him look like a stronger leader. He sought to avoid violence and control what could have been a very difficult situation," said political consultant Hank Sheinkopf. "He'll be remembered for handling this the right way."