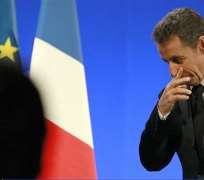 France came under heavy fire on global markets Tuesday, reflecting fears that the euro zone's second biggest economy is being sucked into a spiraling debt crisis.

Global stocks and the euro fell as Italian bond yields climbed back to unsustainable levels on doubts that Italy's Mario Monti and new Greek leader Lucas Papademos, unelected technocrats without a domestic political base, can impose tough austerity measures and economic reform.

European Central Bank President Mario Draghi has predicted the 17-nation currency bloc will be in a mild recession by the end of the year, a view underlined by data showing the economy barely grew in the third quarter and faces a sharp downturn.

"The risks of a technical recession have increased and we expect the economy in Germany to shrink at least in one quarter," said Michael Schroeder of the German economic research institute ZEW.

On the markets, Italy's 10-year bond yield rocketed back above 7 percent, pushing its borrowing costs to a level that helped to trigger the fall of Silvio Berlusconi's government last week and is widely seen as unsustainable in the long term.

Spain's Treasury paid yields not seen since 1997 to sell 12- and 18-month treasury bills.

French 10-year bond yields have risen around 50 basis points in the last week, pushing the spread over safe haven German bonds to a euro-era high of 173 basis points.

The urgency of resolving the debt crisis was underscored by a think-tank report saying that triple-A rated France should also be "ringing euro zone alarm bells" as it could not make rapid adjustments to its economy.

"THREAT TO THE WORLD"
Fears are growing in the United States that Europe's debt crisis is mushrooming into a wider systemic problem.

Alan Krueger, chairman of the White House Council of Economic Advisers, said the European debt crisis was the leading risk to the U.S. recovery.

And U.S. Treasury Secretary Timothy Geithner said Europe had a difficult task in boosting the creditworthiness of some of its economies while also boosting growth.

"That's a difficult balance and you can see they're struggling with it but I think they're gradually making progress," he told a conference sponsored by the Wall Street Journal. "This is absolutely within Europe's capacity to solve and it's within their ability.

"We are helping both directly and indirectly through a range of things you know about, financially, and we have a lot of useful lessons from our experience."

But Greek conservatives set themselves on a collision course with the European Commission, refusing its demand to sign a pledge to meet the terms of a bailout designed to save Greece from bankruptcy and safeguard the euro zone.

New premier Papademos looks certain to sail through a confidence vote Wednesday, but members of the New Democracy party, a key player in his crisis coalition, said they would not bow to "dictates from Brussels" to give written guarantees. New Democracy leader Antonis Samaras says he is opposed to measures that fail to help Greece grow its way out of trouble.

With the survival of the 17-state currency zone in its current form now at risk, EU governments have until a summit on December 9 to come up with a bolder and more convincing strategy, involving some form of massive, visible financial backing.

Geithner restated the U.S. view that the European Central Bank should play a bigger role, while acknowledging the objections of Germany, the EU's main paymaster, to any step that limits ECB independence or its mandate to fight inflation:

"There are lots of ways for the central bank to play a more effective supportive role in resolving this without violating the obvious constraints we respected here ... for (the central bank's) independence and making sure the central bank is not providing a direct source of financing for governments."

Peter Bofinger, a member of the group of economists who advise the German government, said that if the bloc's debt troubles threatened to rip apart the financial system, the ECB should in fact become the euro zone's lender of last resort.

Many analysts believe the only way to stem the contagion for now is for the ECB to buy up large quantities of bonds, effectively the sort of 'quantitative easing' undertaken by the U.S. and British central banks.

"If politics can't do it, then the ECB must do all it can to bring interest rates down to more reasonable levels," Bofinger said at Euro Finance Week.

LACK OF GROWTH
The debt crisis is likely to make matters worse in the next months with nations such as Italy, Greece, Ireland, Portugal and Spain forced to adopt unpopular spending cuts to stop the bond market driving them toward default.

Economists say there is no visible growth strategy in place to counter those austerity measures.

After a disastrous week for the euro zone's third biggest economy, Italy's Monti secured a breakthrough when Angelino Alfano, secretary of Berlusconi's People of Freedom (PDL) party, emerged from talks with Monti saying moves to form a government would succeed.

The prime minister-designate said he would present the results of his consultations to the president Wednesday, hinting he had cleared any obstacles to forming a government.

"I would like to confirm my absolute serenity and conviction in the capacity of our country to overcome this difficult phase," Monti said.

His technocrat-led cabinet have the job of speeding reform of pensions, labor markets and business regulation to put Italy's finances on a sustainable path. Italy must refinance 200 billion euros ($273 billion) of bonds by the end of April.

Germany and France posted solid growth in the third quarter, according to new data. But countries on the front line of the crisis fared much worse, for overall growth of just 0.2 percent. Analysts expected bleaker times in the core economies.

"Forward-looking indicators suggest that the euro zone economy is likely to drop back into recession in the fourth quarter and beyond," said Jonathan Loynes, chief European economist at Capital Economics.