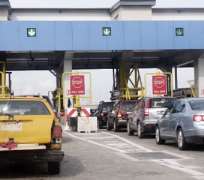 The governor had suspended toll collection on the road in January following protests from residents’ associations of the area, who maintained that it was wrong for government to mandate them to pay toll without providing an alternate route linking Lekki to Victoria Island and Ikoyi.

But Fashola in his address to lawmakers said the state had lost about N4 billion naira in planned revenue due to the suspension order saying the state could not afford to lose anymore funds on the concessioned road project.

The concessionaire is Lekki Concession Company (LCC) Limited which Tuesday said it is awaiting formal directive from government to resume the highly contentious tolling on the multi-lane road.

LCC is an initiative of ARM Group of Companies, a Special Purpose Vehicle set up specifically to execute the Lekki Toll Road Concession Project.

This pioneering project is mandated under a 30-year Concession Agreement for the upgrade, expansion and maintenance of approximately 50km of the Lekki-Epe Expressway (Phase I), and construction of approximately 20km of the Coastal Road (Phase II) on the Lekki Peninsular. The project is designed to deliver essential road infrastructure and services along the Lekki Peninsular of Lagos.

It is however unclear whether government and residents of the area have reached a new agreement on their differences concerning the road.