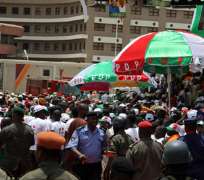 LAGOS - The Peoples Democratic Party, PDP, was yesterday perfecting fresh plans to checkmate the incumbent governor of Bayelsa State, Mr Timipre Sylva from influencing the outcome of the party's primaries in the state. This came as there were conflicting reports as to whether the ward congress scheduled for yesterday held or not.

The party, it was learnt, was trying to settle for a consensus candidate by asking six of the seven aspirants to step down for a candidate who is believed to have the close ears of the presidency.

Vanguard gathered that the party will tomorrow issue final clearance certificates to the seven cleared aspirants in an effort to checkmate any legal move by the incumbent governor.

A cross section of supporters at the Eagle Square, Abuja.

While the camp of Governor Timipre Sylva complained that the party's ward congress never took place, one of the contenders for the party guber ticket, Seriake Dickson told newsmen that information reaching him had it that the exercise was smooth and peaceful.

But the state PDP Legal Adviser, Mr Michael Emiemokumo who spoke to newsmen on behalf of eight other members of the state exco, said the ward congress never took place anywhere in the state.

According to him, the ad hoc committee chairman and his team left the party secretariat with the state Acting Chairman, the Financial Secretary and the Publicity Secretary under the guise of seeing the governor, and also to submit letters to the state Commissioner of Police and the State Director of SSS and the Independent National Electoral Commission only to disappear into thin air.

Attempts to get them on phone he noted proved abortive as they were not picking their calls.

He said when they eventually put a call to the governor, 'it was confirmed that they did not visit him.'

Emiemokumo also alleged that security operatives from outside the state cordoned off the party secretariat and refused the members of the State executive entry.

The action of the officers, he added, was in violation of Article 17, Section One of the party constitution.

'We are totally condemning the action of the people sent from PDP Abuja,' he said.

But, Hon Henry Seriake Dickson, an aspirant for Saturday primaries said the delegate election was smooth and successful as he claimed his supporters monitored the exercise across the wards.

Dickson who spoke to newsmen in Yenagoa thanked the party members for showing maturity, assuring that the PDP would grow stronger in the state.

He urged Bayelsans to eschew violence and embrace peace in the days ahead and not allow themselves to be used by any politician.

Governor Timipre Sylva
While expressing optimism of clinching the gubernatorial ticket on Saturday, he pledged that he would reform the state economy, invest in education, improve on agriculture and tourism even as he urged all factions to join hands with him in rebuilding the state.

'I want every Bayelsan with good ideologies and knowledge to join me to reinvent the state as we are going to revive the ethics and aims of governance', he declared.

He described himself as the forerunner of change, forerunner of a new Bayelsa State, saying, 'I am prepared for good governance.'

Meanwhile the PDP hierarchy in a seeming effort to frustrate the legal options available to Governor Sylva has requested the seven aspirants cleared to contest the primary to appear before the party's National Working Committee, NWC tomorrow to collect their Final Clearance certificates. The move is apparently aimed at frustrating the legal option open to Governor Sylva who had in recent times buttressed his eligibility using the clearance certificate issued him by the Gubernatorial Screening Committee penultimate week.

The party is also expected to use tomorrow's forum to appraise the aspirants of its determination to conduct a hitch free primary on Saturday.

The presence of the aspirants in Abuja is also expected to enable interested stakeholders to network with the aim of pushing through the aspiration of one of the candidates generally said to have the support of top officials of the PDP led Federal Government.

Associates of the Governor were meanwhile pledging not to surrender without a fight but have vowed to keep their strategies close to the chest.

The ward congress to choose delegates for the local government congress was allegedly shrouded in intrigues that left associates of the Governor complaining that his rival and close ally of President Goodluck Jonathan, Rep. Seriake Dickson had collaborated with the electoral team sent from Abuja to hijack the process.

A blanket security cordon was put around most of the state capital, Yenogoa yesterday by anti-riot policemen.

Governor Sylva after waiting fruitlessly for the PDP electoral delegation from Abuja led by Hon. Wakil Mohammed left the State capital, Yenogoa for Abuja where he was last night closeted with fellow Governors in a meeting of the Nigerian Governors' Forum, NGF. The electoral team had allegedly claimed after their initial meeting with the PDP Bayelsa executive that they would pay a courtesy call on the Governor, but they reportedly did not make it to the Governor. They also did not report back to the state secretariat as they promised.

Efforts to contact Mohammed, who was a former Leader of the House of Representatives last night were unsuccessful as his phone line was unavailable. Sylva's associates also complained of not being able to contact him for most of yesterday after the initial meeting.

The PDP in a statement signed by its National Publicity Secretary, Professor Rufai Alkali, requested the seven aspirants cleared to contest the gubernatorial primary to appear before the NWC tomorrow to collect their final clearance certificates.

'They are all expected to arrive the National Secretariat at 12 noon for the formal handing over process of the final Clearance Certificates to enable them return to base quickly in order to go ahead with their preparations for the primaries.'

A source told Vanguard that moves were on to convince six of the aspirants to step down for one of the candidates who is believed to have the close ears of the presidency.