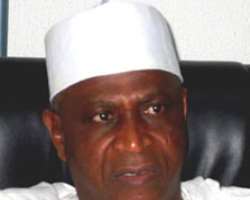 Kawu Baraje
'The issue of fuel subsidy has history, it isn't just starting, it isn't beginning with Goodluck Jonathan. It is an empirical development which has been coming through series of findings and research work and it has been discovered that it is the so called fuel subsidy that is creating a very big gap and removing a very vital strata of the society, the middle class, because concentration of the gains of development that is coming from the economic development is only going to the purse of very few. '

He spoke with journalists in Abuja.
Excerpts:
In this country, the only thing Nigerians enjoy is the fuel subsidy: they provide their own security, rely on generator, source for water on their own. Is the party not asking for social upheaval by endorsing removal of subsidy? Secondly, as the ruling party, what are you putting in place that would remedy the situation?

Let me address the question of palliatives measures and the social strive that may accompany the removal of subsidy. Let me address those two questions as one. You see, when government decides to remove the oil subsidy, it must have weighed the consequences, they must have done their home work, together with the party and that's we have been doing even before now.

The issue of fuel subsidy has history, it isn't just starting, it isn't beginning with Goodluck Jonathan. It is an empirical development which has been coming through series of findings and research work and it has been discovered that it is the so called fuel subsidy that is creating a very big gap and removing a very vital strata of the society, the middle class, because concentration of the gains of development that is coming from the economic development is only going to the purse of very few.

Therefore, those gains which are supposed to be used for the development of infrastructures, provision of medicines in our hospitals, creation of jobs for our youths, good roads and many other infrastructures that bring convenience and succor for the masses are now going to the pockets of very few Nigerians.

The initial sufferings, the initial hardship is better faced now and after three months, or thereabout the effect of the removal of subsidy will have started making impact, directly on the last man on the street.

You are saying the common man will now pay more to fuel his generator.

Yes, it is because these products aren't available enough. In other to now make them to be available, in abundance without the common man having to travel so far to get an hospital, without the common man having to go through bad roads to reach his farm, in order for the common man to be able to buy petroleum at a cost that will be convenient for him to run his own generator, if he has to run that generator, because at the end of the day the improvement on power will have been guaranteed-it is part of the succor that will be given to Nigerians.

The PDP agreed with Mr. President that a committee of eminent Nigerians, cutting across part differences, cutting across tribal and religious whatever will be constituted to manage the gains that will be accruing from removal of subsidy. We are all afraid of change, but it isn't possible for us to develop without change and that's why as a result of the empirical findings from the researches of experts, it has become imperative that that we must remove the subsidy now, so as to bring back succor to the Nigerian masses and bring back that middle class that will strengthen the economy of the average Nigerian and the per capital income of the average Nigerian becomes buoyant.

A lot of alternative measures are being put in place, for example committee to work out the modalities on how to bring about immediate succor to the masses, but there are some of us here who have up to eight vehicles in our homes, while an average Nigerian on the street is struggling to buy a bike. The removal of oil subsidy is a leveler; it levels that man who has ten cars and doesn't know what to do with those cars. It will force him to reduce it to one, whether he likes it or not and the money that will accrue will now be spread. I am just trying to bring it down as a layman on how it is going to look like.

So, the removal of subsidy will help to put in place infrastructures that will alleviate the plight of the common man. Of course, there will be initial problems, but it is better to encounter them now than to continue to encounter the present sufferings arising from the sustenance of subsidy. That's why we must act now. So, what we are saying is that we are quite aware of the initial problems, but the government is prepared to ensure that such are brought to the barest minimum.

But when PDP was campaigning for votes of the Nigerian electorate for Jonathan, why didn't you tell Nigerians that you would remove fuel subsidy?

[long pause….] well, we had an exercise on youth development at the villa about three weeks ago. We didn't tell anybody we were going to employ through that, but we did. The way we get our transformational agenda to the people-the way we get it working is purely administrative-whether it is through removal of fuel subsidy, or through its retention. But because of the significance of oil subsidy, that's why we are making an issue out of it.