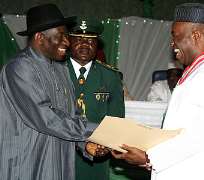 It gives me great pleasure to address you today on this auspicious occasion of the Investiture Ceremony of the 2010 and 2011 National Honours Award to citizens and residents of this country who have distinguished themselves in various capacities.

Today is particularly significant because we are gathered here to publicly acknowledge and reward the efforts of those who have contributed to the development of our nation.

The significance of an occasion like this goes beyond the ceremony itself. It reminds us that our country can only make progress on a sustainable basis, through individual and collective efforts.

We are a nation with a proud and rich heritage that dates back into antiquity: a nation of great warriors, poets, traditional artists, great musicians, scientists who have distinguished themselves on the world stage, brave athletes, and persons in all stations of life with memorable achievements.

And just as persons distinguished themselves in the past, Nigerians of today continue to do so in all walks of life, in manners that are at once memorable and impressive. A ceremony such as this recreates that great value and offers us a platform for celebration and reflection.

It is this that continues to give us hope, that whatever may be our differences or the difficulties on our path, we can remain confident that we are a nation of many blessings.

We must work harder not to forsake this special feature of our collective being. We must make a determined effort to pull our individual efforts together to build a virile, economically viable and politically stable country. Our nation will always need men and women of good character and courage, in our collective march towards national transformation.

Nation building requires the sacrifice of all citizens, both the governed and their leaders. It is this awareness that informed our decision to offer ourselves for service for the purpose of creating a new Nigeria where good governance, respect for the rule of law, due process, transparency and accountability in the management of public resources are accorded topmost priority.

You will recall that on the day of the inauguration of this Administration, we made a pronouncement on our resolve to move this country forward through the Transformation Agenda.

The thrust of the Agenda is to evolve a strong and virile nation through employment generation, poverty reduction, value re-orientation and the rebuilding of confidence.

We have followed up with concrete measures, and the train of national progress, I want to assure you, has since embarked on a steady journey. I want to seize this opportunity once again to call on all Nigerians to join the Transformation Train for a better Nigeria.

For our nation to make progress, we need nation builders at all levels, not nation destroyers, not persons who by their words and deeds, sabotage the collective interest of all.

Distinguished Ladies and Gentlemen, in the quest for a better society, we may have to take decisions which would at inception be unpleasant in some cases, but we must face the reality, be honest with ourselves and ensure that we do our best for our country at all times.

I wish to emphasize that one salient characteristic of democracy is that it is participatory. It is in the light of this fact that I call on the distinguished recipients and indeed all Nigerians to see themselves as stakeholders by joining hands with us and fully participate in re-evaluating, re-designing and re-formulating the country’s development programmes.

With the steadfast support and productive partnership of the good people of our dear country, I am confident that we are well on our way towards actualizing our set objectives of tapping our limitless potentials for national growth and development.

I am informed that since the inception of the Award Scheme in 1963, a total of 3,924 persons have received National Honours. Even though the award is the prerogative of the President, the recipients are usually chosen on the advice of a National Honours Committee, guided by a set of criteria, which emphasizes contribution to national development, individual distinction and merit.

The National Honours Award is an expression of a national need to continue to iconize people, and identify symbols of public life. I am pleased to note that in this year’s list of awardees are persons who have truly distinguished themselves: artists, public servants, businessmen and women, scholars and researchers.

I congratulate all the awardees who have today joined the family of National Honour Recipients and urge each and every one of you to view this national recognition as a motivation to rededicate yourselves to continue with your good services to the nation and humanity in general.

Let me also use this opportunity to appreciate our non-Nigerian recipients for your belief in us as a nation and a people. You can be assured that we will continue to provide the requisite enabling environment to allow you undertake your legitimate business anywhere in the country.


I assure all recipients that your selfless service has been particularly recognized by a grateful nation because you have individually and collectively made useful and instructive impact. As you receive the symbols of your investiture, you must do so with a solemn pledge to continue to remain “faithful, loyal and honest” to your country, and to continue to “uphold her honour and glory”.

I would like to commend the Chairman and members of the National Awards Committee for their selfless effort in handling such a delicate responsibility.

One thing I am aware of is that there have been criticisms of the National Award nomination and selection process. I have since directed the appropriate departments to note the concerns that have been expressed and to take steps to ensure further improvements, so that the National Honours Award, can continue to serve its purpose.

National Honours are not merely decorative. They remind us of an important part of our responsibility as citizens; we all must endeavour to do the best for our country, even as we realize with deep humility that all human beings are fallible. We must look forward with confidence and hope, that our country, through each and every one of us, can indeed put its God-given endowments to the best possible use.

(Speaking extempore, the President adds): “Let me re-emphasize again, how some of the people are selected because there are comments from very young people who are a bit confused about how people are selected for National Honours. As I have mentioned even the most celebrated Nobel Peace Prize is being criticized so definitely you will expect criticisms. But in Nigeria you have three awards, two are parallel, and we gave two today, the GCFR and GCON series and of course, the Nigerian National Merit Award.

“The Nigerian National Merit award is meant for scholars and not just scholars, but scholars with distinction and the committee that will select those who will receive that award are among the eggheads.

“The traditional birth attendant that probably works in an area where there is no doctor and successfully delivers hundreds of babies can be awarded and recognized by the President. So is a sportsman who is illiterate, but a good footballer, wrestler or a boxer who projects the image of this country globally and wins laurels and bring us to lime-light could be recognized in these honours series.

“Also in the case of the military, an officer, a corporal or even a private soldier could be given a medal that probably a colonel or general might not have for show of gallantry and that guided the National Honours.

“So the position you occupy does not give an automatic award except for some positions like the GCFR which is given to anybody who becomes the President of this country or the GCON given to anybody who becomes the vice president or the head of the National Assembly or the head of the Judiciary. These are given by virtue of their positions, but others are given by virtue of what you have contributed to the society not necessarily because of the office you hold.

“For you to be recognized and honoured, we will want to see what you have used that position to achieve for us. Do you use that office to destroy us or do you use it for the development of your domain? So also is a youth leader, a woman leader or an elder, do you use that position to bring development and peace to your people at your community level, local government level, state level and the national level or use it to bring crisis or destruction to our people? This is what guides the selection of this award and that is why you see a mixed group of people being recognized.

“You can see today that we have recognized Aliko Dangote with the GCON because we must recognize enterprise. This is a man who has been able to employ thousands of Nigerians as we heard it from the citation.

“Today, I am having the GCFR the highest in the land by virtue of the fact that I am the President of this country, but if I am not the President another person must be the President of Nigeria, but if Aliko did not have that business acumen to build that empire probably we wouldn’t have had somebody to employ thousands of Nigerians.

So, those who by their innate abilities and creative energies have been able to make impact in our society even deserve more honour than those of us holding political offices. So, we would continue to encourage enterprise, creativity and Nigerians who have excelled in whatever form.

“A welder, electrician or anybody who by virtue of what you do, you’ve done it with much dedication and impacted society significantly can be honoured by the president.”

Distinguished ladies and gentlemen, let me once again heartily congratulate all the awardees, their friends and families, on behalf of the Government and good people of Nigeria, and wish you all the best in your future endeavours.

Thank you and may God bless you all.