“I Have a Good Reputation” ---Bimbo Manuel 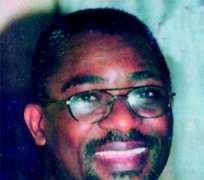 A “gentleman.” This is how many who have come in contact with Bimbo Manuel are wont to describe him. If you want them to go any further, they'll say he is, indeed, a very principled man whose integrity is legendary. Wow!
This was the man NFC met recently on the grounds of the Lagos State Television, Ikeja. Manuel, undoubtedly, is one of the well known faces on television. An actor of repute who has featured in countless block-busting movies, he also features in the early morning Saturday talk-show – Bimbo-Shola Connect.

Manuel, as he let us know, didn't start originally as an actor. Armed with a diploma in Textile Technology and a heart full of love for music, he decided to audition for the position of a Disco Jockey (Dj) at the Ogun State Broadcasting Corporation in 1979. Luckily, he succeeded and that was how his career in broadcasting started. He rose to become a presenter/producer. In 1985, however, he delved into television, and since then has not looked back.

In addition to being an actor, Manuel who is from Lagos State also doubles as a producer / director, having produced and directed several A-List movies. He is very well respected in the industry, just as on various occasions he had stood as a mouth-piece for his colleagues and friends.

At over 50, he hardly discusses his family, but he did say he has “a lovely home.” Manuel attended the University of Port Harcourt where he studied Theatre Arts under the distinguished tutulage of late Professor Ola Rotimi.

We hope you'll enjoy the interview we had with this ace voice-over artiste.

Days ago, you were one of the many who showed up for the “Hunger Strike” rally organised by a coalition of Nigerian artistes. You must have had a personal reason for attending.

Well, as a broadcaster not just an actor, it is directly connected to my means of livelihood. Some Saturdays, ago, we had the Director-General of Nigeria copyright commission on our show, that's the Bimbo-Shola Connect and we talked about the issues bothering artistes in Nigeria. So you see that it was important for me to have been there to get artistes perspective about copyright and more importantly as an artiste who is also involved.

So did you also observe the four-day “hunger strike”?

No, I didn't give any commitment to go on any hunger strike, not because I do not believe in the course, but because I wouldn't be dishonest about such a thing because it's a very serious matter. There wouldn't have been anybody checking up on me if I was doing it, and if no one was checking up on me to be sure I was doing it, then no one would have noticed that I was hunger striken. I was in detention for instance, and someone was afraid that I was going to die if I was not eating. Maybe I would have done it but…

Are you saying the strike might not be that effective afterall?

Maybe the publicity that the intent was given might be effective but the act itself I don't know if it would have achieved anything.

You are an actor and also a broadcaster. Which came first?

I started out as a broadcaster on radio, actually as a presenter, newscaster and producer at the Ogun State Broadcasting Corporation, OGBC in 1999 and then I crossed over to Ogun State Television OGTV, still doing the same thing. I was doing it actively untill about 1985-86, when there was a crossover point. I started acting full-time in 1986. I had to drop out as an active broadcaster, though I still practised as a voice-over artiste.

So, would you then agree that it was acting that gave you the fame?

I don't know about fame but one gets recognised. But I'll say it's been acting and reputation. When people see you as being principled, they know some of the things you stand for, they know you. Well, I still can say that it was acting.

What are those things you stand for?

Truth, irrespective of who has to listen to it. Good behaviour, comportment in whatever sacrifices we've got to make to be correct and not to misbehave.

Is that why you are part of the people supporting this “Ejike Asiegbu – Must Go” campaign?

I am not a part of the “Ejike-Must-Go” campaign and I have never been a part of it. I have also never been a part of the “K.O.K-Must-Come-In” campaign. I have never been against or for him. I am on the side of what is correct and fair for all, the respect of the law. It's about what the constitution says, about an Ejike Asiegbu who is the president of the association. If there are issues about him that seem to be in conflict with the constitution, then apply it and get him out. Two, we cannot say because one party is wrong then seek justice with another wrong. This is the part some of us are talking about. As a friend, a colleague and someone I have known for a while, I called Ejike and spoke to him to let him know what my position is: that he does not have my support. It does not affect my relationship with him as my friend, and “kid” brother. I have also sat down with KOK and told him that I am not in support of Ejike and also will not support an illegality.

Are you saying Kanayo O. Kanayo's entrance into the race for the presidency of the Actors Guild of Nigeria is illegal?

I have asked what part of the constitution recommends, that if a president does not or refuses to leave office, the Board of Trustees would set up the kind of committee K.O.K is heading? It is not right and is bad for the image of the Nigerian actor.

You are known to be one of the top cross over artistes in the country having featured in both English and Yoruba movies. Tell me some of these movies?

Thank God I am not limited in terms of language when it comes to acting. I have done Hostages, Kingmaker with Joke Silver and Olu Jacobs and I think it was an incredible production, Sitanda, directed by Izu Chukwu who I think is one of the leading directors in the industry today. I have done Ogidan and others that I can't remember now.

What do you look out for when a script is handed to you?

First the story, two, the clarity with which the character that I am supposed to be playing, is defined. The willingness of the producer or director to give me a free hand (not lawlessness) within reason to inject the whole thing to clearling define the character. I look out for the director and the people I am playing with or against. I also look out for the crew and of course the money.

I heard that you are pretty expensive to contract and successful. How true is this?

I don't really know. What might be expensive for you might be affordable for others, and what is affordable for you could be off the roof for others. I do get paid. I am well to do in my body and spirit. I have a good home, great children and a good wife. For me, those are indices of well being. Defined like that, I'll say I am successful.

Did any of your parents in any way influence your becoming an artiste?

Not at all. Apart from one of my elder brothers who was a great and fine artiste, he could draw life pictures I was not exposed to the arts. I grew up at a period when television was not popular. You had to peep from other peoples window to see what they are doing. I never knew I was going to be an artiste and I didn't start growing deep interest in it until I was about 18 and 19 years old. Then I wanted to be a DJ because I loved music and they played great music then. I did night clubs, put parties together so people thought I should go to a radio station. I was asked to go to OGBC for an audition. I went and passed. Acting also came as a chance for me. After studying for a diploma in textile technology here is Lagos, I wanted to do something that was a bit mainstream. At first I wanted to be a bio-chemist, but I was discouraged by my brother. He did say I needed to be independent. Then I wanted to be a soldier, I went for the interviews, physical and medical test et cetera and I passed everything. I was sent a letter to come to resume in one barrack in Mokola, Ibadan but my parents were mad at me saying the army was for dropouts, and they thought I would be going to war.

Have you ever produced any movie?

I have. I have produced quite a number of television productions. Two Yoruba films, one of them was entitled Pastor Dende. I also directed it. The other one, I still haven't released. The market is not just right because we spent a bit too much money on it for it to make sense and for us to release it. The market is 100 per cent undefined and volatile.

You are first a broadcaster, then an actor, producer, director and a voice-over artiste. Which do you love doing most?

All of them. I just love being me. Bimbo Manuel. I am a complete package. I also write. I am in the process of publishing one.

How much do you think can be enough to shoot a good movie?

No serious minded professional will tell you that, because it's about the concept of the script, calibre of actors, props, make-up, costumes and production values that you cannot recklessly put a value on