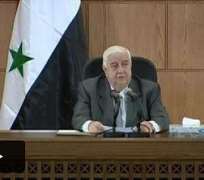 Jordan's King Abdullah told Syria's President Bashar al-Assad on Monday he should step down and the European Union added pressure with more sanctions after the Arab League's surprise suspension of Damascus for its violent crackdown on protests.

Syria looks ever more isolated, but still has the support of Russia, which said the Arab League had made the wrong move and accused the West of inciting Assad's opponents.

Despite the diplomatic pressure, there was no let-up in violence and some 40 people were killed in fighting between troops and insurgents and army defectors near the Jordanian border, Syrian activists said.

Jordan's King Abdullah said Assad should quit. "I believe, if I were in his shoes, I would step down," he told the BBC.

Syrian Foreign Minister Walid Moualem said the League's decision, due to take effect on Wednesday, was "an extremely dangerous step" at a time when Damascus was implementing an Arab deal to end violence and start talks with the opposition.

Syria called for an emergency Arab League summit in an apparent effort to forestall its suspension.

Nabil Elaraby, the organisation's secretary general, said he had delivered the request to rulers of Arab League states and 15 members would have to approve in order to hold a summit, according to Egypt's state news agency MENA.

The League's suspension is a particularly bitter blow for Assad who has always seen himself as a champion of Arab unity. But adding to the injury, the Cairo-based League plans to meet Syrian dissident groups on Tuesday.

Even so, Elaraby said on Sunday it was too soon to consider recognizing the Syrian opposition as the country's legitimate authority.

Elaraby met representatives of Arab civil society groups on Monday and agreed to send a 500-strong fact-finding committee, including military personnel, to Syria as part of efforts to end the crackdown on demonstrators and dissenters.

Moualem said Syria had withdrawn troops from urban areas, released prisoners and offered an amnesty to armed insurgents under an initiative agreed with the Arab League two weeks ago.

Yet violence has intensified since then, especially in the central city of Homs, pushing the death toll in eight months of protests to more than 3,500 by a U.N. count. Damascus says armed "terrorist" gangs have killed 1,100 soldiers and police.

Syria's ban on most foreign media makes it hard to verify events on the ground.

SHOOTING, TANK FIRE
In the latest violence, army defectors attacked a security police bus at a highway intersection near Khirbet Ghazaleh, 20 km (12 miles) north of the border with Jordan, activists said, one of the first reported major armed clashes.

Government troops, backed by armor then launched an assault on Khirbet Ghazaleh, on the Hauran Plain an area of flat farmland that also borders the Israeli-occupied Golan Heights, and killed 20 insurgents, the activists said. A similar number of troops were killed, they said.

"Members of the (defectors') brigade fought back when the army attacked and Bedouin from nearby villages also rushed to help Khirbet Ghazaleh," said one of the activists, who gave his name as Abu Hussein.

Security police also shot dead activist Amin Abdo al-Ghothani in front of his nine-year-old son at a roadblock outside the town of Inkhil in southern Syria, a grassroots organization known as the Local Coordination Committees said.

In Homs, residents said renewed tank shelling killed a teenager and wounded eight people in the restive Bab Amro district. Students in the Damascus suburb of Erbin chanted "God is greater than the oppressor," according to a YouTube video.

"The Libya scenario will not be repeated," he said.

It was the Arab League's decision to suspend Libya and call for a no-fly zone that helped persuade the U.N. Security Council to authorize a NATO air campaign to protect civilians, which also aided rebels who ousted and killed Muammar Gaddafi.

Syrian state television said millions of Syrians protested at the League decision in Damascus and other cities on Sunday.

Moualem apologized for the assaults, which have worsened already tense ties between Syria and its former friend Turkey.

"We will take the most resolute stance against these attacks and we will stand by the Syrian people's rightful struggle," Turkish Foreign Minister Ahmet Davutoglu told the Turkish parliament, saying Damascus could no longer be trusted.

Non-Arab Turkey, after long courting Assad, has lost patience with its neighbor. It now hosts the main Syrian opposition and has given refuge to defecting Syrian soldiers.

EU SANCTIONS
The European Union extended penalties to 18 more Syrians linked with the crackdown on dissent and approved plans to stop Syria accessing funds from the European Investment Bank.

EU foreign policy chief Catherine Ashton said she was in touch with the Arab League to work on an approach to Syria, but the 27-nation body appears set against military intervention.

Syria, which borders Israel, is Iran's main Arab ally and has strong ties with Shi'ite Hezbollah guerrillas in Lebanon and the Islamist Hamas movement that rules the Gaza Strip.

Russia, an arms supplier to the Syrians, has urged Assad to implement reforms but opposes sanctions and has accused the United States and France of discouraging dialogue in Syria.

"There has been and continues to be incitement of radical opponents (of Assad) to take a firm course for regime change and reject any invitations to dialogue," Lavrov said.

The Arab League also plans to impose unspecified economic and political sanctions on Syria and has urged its members to recall their ambassadors from Damascus.

Assad still has some support at home, especially from his own minority Alawite sect and Christians, wary of sectarian conflict or Sunni Muslim domination if he were to be toppled.

Despite some defections, the Syrian military has not emulated its counterparts in Egypt and Tunisia in abandoning long-serving presidents faced with popular discontent.

The government has acknowledged that sanctions are hurting, but it is not clear whether this will force any policy change.