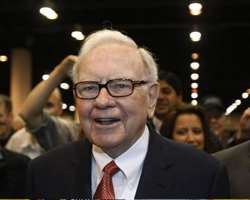 Warren Buffett has always made his distaste for technology investments clear, but on Monday he changed his ways in spectacular fashion.

The Berkshire Hathaway chief executive said he has bought nearly $11 billion of International Business Machines Corp stock in the last eight months, building a roughly 5.5 percent stake that potentially makes him the largest shareholder in the company.

It was a surprise reversal for Buffett, who has always said he would not invest in technology because he largely did not understand it. But in an interview on cable television network CNBC, Buffett said he was struck by IBM's ability to retain corporate clients, which made it indispensable in a way that few other services are.

"It's a company that helps IT departments do their job better. It is a big deal for a big company to change auditors, change law firms" or to switch to a new technology vendor, Buffett said.

"I don't know of any large company that really has been as specific on what they intend to do and how they intend to do it as IBM," said Buffett, who teased CNBC's anchors for a few minutes with a guessing game about what the major investment was before unveiling the IBM news.

Buffett, known as one of the best value investors of all time, appeared to have come to IBM late in the game -- a year ago the stock was a third lower than it is now. Buffett himself said he should have paid more attention to IBM five years ago.

Yet technology analysts said he had still gotten a good deal.

"Maybe he could have gotten a better price ... but if you look at Warren Buffett's investment policy I would assume this is a long term investment," said Collins Stewart analyst Louis Miscioscia. "This is not your father's IBM; the management has done a good job of cost control, returning cash to shareholders."

CHANGE OF PLANS
Though it seems like a contrarian move, one long-time Berkshire investor speculated that Buffett was buying IBM for its services business rather than its technology platform.

"It's going to be one of the four or five 'generals' in the portfolio," said Steve Check, chief investment officer of Check Capital Management, a California firm.

Another long-standing Berkshire shareholder said the investment was also a global play.

The investment fits with Buffett's desire to make big bets. Earlier this year, in his annual letter to investors, he joked about having a loaded elephant gun ready to make big deals.

He has followed through on that, buying chemicals company Lubrizol, investing $5 billion in Bank of America Corp and taking the IBM position.

Though Berkshire started buying IBM shares in March, Buffett's comments suggested the firm did not cross reporting thresholds on the investment until the third quarter, which let him keep the stake secret until Monday.

Buffett has also previously asked for, and received, the right to keep some investments temporarily confidential on the grounds that, given his notoriety, if his trades were to be known, masses of investors might try to pile in as well.

The IBM stake was so confidential, in fact, that the company had no idea Buffett was investing in it until he disclosed that he had bought 64 million shares on TV on Monday. An IBM spokesman declined to comment.

According to Thomson Reuters data, Buffett's 5.5 percent position in IBM would tie him with State Street Corpinvestment management affiliate State Street Global Advisors for the largest stake in the company.

During the third quarter, IBM shares traded in a range of $157.14 to $185.61, suggesting that no matter when Buffett bought, he is still up on his investment at least $160 million.

The median analyst price target for the stock is $200, with 14 of 28 analysts rating it a "strong buy" or "buy" and the rest rating it a "hold," according to Thomson Reuters data.

NOT BUYING EUROPE
One thing Buffett is not buying is European banks.
Buffett comes up whenever there is talk of a large European bank needing to raise capital, particularly in the current environment of writedowns on sovereign debt.

But he told CNBC that he would need to understand European banks better before investing, and that he has not yet seen an investment opportunity there in which he wants to take part.

The "Oracle of Omaha" and Berkshire Hathaway chief executive said he expects Europe's economy to show improvement 10 years from now, but getting there will be difficult.

In a three-hour interview, Buffett also disclosed that he was interviewed by the U.S. Securities and Exchange Commission in June about David Sokol, his former heir apparent who left Berkshire amid scandal earlier this year.

Sokol left the company after it emerged he had bought shares in Lubrizol while trying to convince Buffett to acquire it.

Buffett said he had an informal interview with the SEC, which was not a deposition and was not transcribed by a court reporter. He told CNBC the SEC had questions it wanted answered, and he and Berkshire were cooperating.

The Sokol episode turned into a major scandal for Berkshire earlier this year, with Buffett conceding at the company's annual meeting that he had handled the matter poorly.