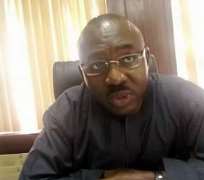 I read the interview by the Edo State Commissioner for Information and Orientation, Mr. Louis Odion, in the National Mirror of Wednesday, November 2, 2011 wherein he claimed that his boss and governor of Edo, Comrade Adams Oshiomhole, inherited a bankrupt state.

He outlined a number of “creative ways”, to use his words, which Oshiomhole devised to get out of the rot of infrastructure and inability of the state to pay its bills, some of which was “maximum tax regime” to bolster the Internally Generated Revenue (IGR). He claimed the governor also cut down the cost of running government and was able to save up to N1 billion within the next year.

According to him, “it was the money he used as seed money for massive projects after the first year. From that humble beginning of having less than N300 million as IGR, the state as at last month recorded more than N1.6 billion as IGR, representing more than 500 percent increase.”

Odion said that the state had rehabilitated and reconstructed more than 512 schools and laboratories and had tarred more than 500 kilometres of roads. Read him: “It is true that Edo State at the moment is a vast construction site in the sense that we have more than 190 projects going on simultaneously across the three senatorial zones of the state. More than N120 billion have been committed in the process. It is also true that the state government went to the Capital Market to raise N25 billion. So, the projects we are executing now are being partly financed with what we raised from the Capital Market.”

He also claimed that “for a long time, there was no governance in Edo State, pointing out that what happened were stealing of public funds and sharing of our patrimony by godfathers. But in the last three years, Edo people have seen the difference. They have left darkness and have seen the light….”

There is no doubt that Odion is trying to apply himself to his present assignment as a spokesperson and image-maker of Edo State Government under the watch of Oshiomhole. I also expect that in the discharge of his duties, he will inject a large dose of propaganda to achieve predetermined ends.

For instance, the figures he released and/or cited are quite interesting, but I doubt if they can sit pretty on factual foundations. Validations: his claim that Edo was bankrupt when Oshiomhole stepped in is arguable but what is not arguable is that former Governor Lucky Igbinedion, whose machinery quietly propped up Oshiomhole’s governorship candidature on the ACN platform, was responsible for the bankruptcy.

In fact, former Governor Oserhiemen Osunbor and not Oshiomhole directly inherited an arguably bankrupt state from Igbinedion and superintended it for eighteen months, trying to lay solid infrastructure foundations, and he actually started quite a number of road projects and de-silting of Benin township drainages, before Oshiomhole came in through the November 14, 2008 Court of Appeal verdict.

The eighteen months Osunbor spent in office were critical in terms of deliverables and/or democracy dividends; so, if there was infrastructure decay as claimed by Odion, Oshiomhole could not have appreciated the enormity of the tragedy inflicted on the state by his ally (Igbinedion) because Osunbor had already gone way ahead in the process of salvaging the deplorable condition of road infrastructure.

The essence of propaganda is to misinform with half-truths. Odion said it took the economist in Oshiomhole to save up to N1 billion from cutting down the cost of governance and spending the money so saved to launch massive projects in his first year in office.

What are these massive projects? How much did they cost? It is a fact that in Oshiomhole’s first year, he received about N40 billion as statutory allocation from the Federation Account; more than N8.798 billion as special release from Excess Crude Account; and about N11 billion from IGR, managing about N60 billion overall.

How much of this went into the so-called road infrastructure and other projects claimed to have been built by the State Government? How much, in that first year that Odion spoke about, was spent on salaries? These are particular details I expected Odion to tell Edo people. Was it N13 billion or N15 billion or N20 billion? Were there some savings and if there were, how much are we talking about?

After the first year, the expenditure outlook in the subsequent two years should have been declassified in the simplest forms (not the inscrutable genre of audited accounts that make no meaning to the majority of people, especially the lumpen) so that Edo people would be able to know how much went into the so-called road infrastructure and other projects.

In three years, Edo Government under Oshiomhole has received close to N200 billion (from Federation Account, Excess Crude Account, VAT and 13 percent Derivation and IGR). If the N25-billion loan sourced from the Capital Market is added to it, one should be talking of over N200 billion in three years. This is certainly massive!

If 65 percent of this went into infrastructure and projects, we should, as rightly claimed by Odion that more than N120 billion had been committed in the process, be talking of about N130 billion. But the figure is not even the issue. The issue is the endemic corruption in the contract award process or system. How were the contracts awarded? By how much were the contracts inflated, not marked up for profit? Is the quantum of money expended on infrastructure and projects commensurate with what are on ground?

This is the bone of contention. Under the government of Oshiomhole’s political benefactor-Igbinedion-(I have to be specific about individuals rather than being general by referring to the PDP and the godfathers as Odion and his boss, Oshiomhole, are wont to do), it is a fact of history that nothing concrete was on ground to show as infrastructure development.

And as Odion rightly pointed out, “for a long time, there was no governance in Edo State. What happened were stealing of public funds and sharing of our patrimony by godfathers.” But Odion was understandably being clever by not mentioning who the godfathers were. Who was controlling Igbinedion as governor? Perhaps one man was: his father-Chief Gabriel Igbinedion; certainly not Dr. Samuel Ogbemudia nor Chief Tony Anenih. Igbinedion ran the show for the eight years he was in office.

His allies, including Oshiomhole, with whom he entered into a conspiratorial alliance to run Edo aground, nudged him on. When Igbinedion could not pay workers’ salaries, Oshiomhole who was then the President of Nigeria Labour Congress (NLC) looked the other way; whereas he showed more than passing interest in some other states with similar problem. What could have been more corrupt than that?

These elements and not the so-called godfathers were the ones who should be slammed for criminal conspiracy to undermine our state and plunder our commonwealth for their personal aggrandizement.

I shudder at Odion’s defence of the massive deception, not projects, going on in Edo in the name of governance. His verdict that there was no governance in Edo State for a long time still applies. Are there governance and responsibility in Edo State? Are public funds being judiciously utilized? Are contracts being transparently advertised and taken through competitive bidding a la due process?

For instance, how much has Oshiomhole’s government awarded, for construction, a kilometer of road? Consider the recently revoked 8-kilometer Benin Airport road, which was originally awarded to Servetec Nigeria Limited at the cost of N4.8 billion and later reviewed upwards twice: it has now been re-awarded to Setraco for N6 billion. How much does a kilometer translate to? You can work it out! Scandalously high, fraudulently over inflated! Not so?

I am not even bothered about the corruption in the process that led to the revocation; what about the sleaze in the upping of the contract sum? How much percentage cut would find its ways into some private pockets as gratification? This is the issue. This is the problem that is confronting Edo State.

If Igbinedion was not clever enough to create a façade of performance, of building infrastructure for far more than they would ordinarily cost and he chose not to be creative in plundering the public treasury, Oshiomhole has proved that his experience in the questionable management of NLC fund, especially the Labour Mass Transport Scheme which was his schedule as Deputy NLC President, has come in handy in the equally questionable management of Edo State funds.

There is no way there would not have been brazen corruption in the management of Edo fund with a desperate politician who is looking for a second term and who will therefore be ready to deploy billions of state funds to prosecute the battle; or a public officer whose tendency to acquire materials things is inexplicably high.

Edo people must stand up against corruption in governance at every point, regardless of who is in the saddle. The tenor of corruption must not linger; it must be broken and not even Oshiomhole should be allowed to pull the wool over the eyes of the people any further by his political contracts, flaky roadside developments and farcical infrastructure showmanship.