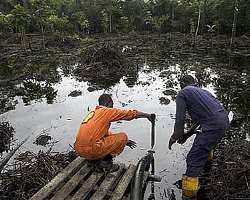 Anglo-Dutch oil giant Shell on Sunday reported a fresh spill from a key delivery pipeline in southern Nigeria, but said it has contained the leak.

"We had dispatched our spill containment team to the site as soon as we received the reports and the personnel succeeded in containing the leak," it said.

Shell, which announced a production cut from the same facility last week, said it was investigating the incident to determine the cause and impact.

"The delivery line is part of the Okordia-Rumuekpe line, which SPDC shut down following a leak on November 8 and subsequent fire incident," it said, blaming last week's incident on sabotage.

"A joint investigation visit found that the spill was caused by hacksaw cuts," it said, adding that there had been several hacksaw cuts on the Adibawa delivery line this year.

But Environmental Rights Action (ERA)/Friends of the Earth Nigeria (FoEN), which visited the site, ruled out sabotage in a statement Sunday.

"Anybody who visits this spill site can attest to the fact that this is a case of equipment failure," the environmental group said.

"From experience gained in the field, this is one of the most obvious cases that points to that fact: no signs of any clearing around the spill site, no signs of any digging," it said.

"This is the 12th oil spill that has occurred between August and November 2011 in Ikarama community environment," ERA said, adding that Shell should visit the area, clean up the spill and compensate the affected residents.

"Adequate compensation should be paid for damages to crops, impacted farmlands and general damages incurred by the victims of this latest spill," it said.