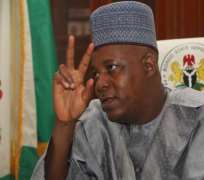 In a unanimous verdict, the 3-man panel said that the petitioner failed to file its application within the time set aside for pre-hearing notice after it dismissed its earlier filing on August 11, 2011, for initiating it without following due process. The judges said though the petitioner had a right to seek an extension, it failed to do so within the time allowed.

According to the Chairman of the tribunal, Justice Sani Adamu, “A situation where a petitioner failed to bring an application for issuance of pre-hearing notice form amounts to an abandoned case.â€¨

"The tribunal has no discretional power to exercise in respect of paragraph 41 (1) of the first schedule” which stated that “no application for extension of time shall be taken.

“It is our humble opinion that this tribunal is not empowered to use discretion in this circumstance," the Chairman added, dismissing the petition in its entirety.

In his reaction to the judgment, Governor Shettima who was in court alongside some of his aides said the ruling was a victory for democracy.