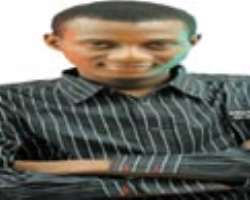 Feelers from Akoka, Lagos where Coded Tunes music studio is located are pointing to the fact that there are slight problems. Klieglights was told that the studio, which had churned out several hits and had hosted several music stars such as 9ice, Ruggedman, Lord of Ajasa and Banky W, has been destroyed by some up and coming artistes.

The reason for this, Klieglights was further told, was because ID Cabasa was alleged to have collected studio fees from the young artistes without recording their songs for them. The irate artistes, alleged to have placed several calls and made appointments which ID Cabasa failed, took the laws into their hands and decided to destroy the studio.

Though the damage caused on the studio is minimal, it was said to have gotten to the award winning music producer. Insiders, however, said one of the reasons for ID Cabasa 's busy schedule is as a result of his inclination with Yes Media as one of the artistes and in house producers. Meanwhile, Yes Media and its artistes have been travelling all over the world doing shows and concerts.