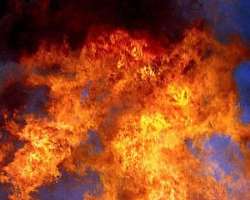 Jos – A mysterious fire, Monday, gutted a section of the headquarters of the Nigerian Film Corporation in the Plateau State capital destroying vital documents.

nollywoodgists.com learnt that the fire started around 4.30 pm shortly after workers closed for the day, but the cause remains a mystery because neither the public electricity nor the generating set were on at the time of the incident, according to some members of staff of the corporation.

The fire, coming on the heels of the recent searchlight of the Economic and Financial Crimes Commission (EFCC) on the corporation over an alleged N12 million scam, is setting tongues wagging among members of staff and the public.

Top members of the management of the establishment were recently questioned by operatives of the anti-graft agency over an alleged diversion of funds meant for the relocation of the corporation to Abuja which was later shelved.

A similar mysterious fire also gutted the administrative department of the establishment some years ago following investigations into some of the activities.

However, spokesman of the corporation, Mr. Brian Etuk dismissed insinuations of any foul play when contacted.