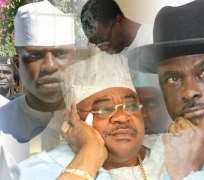 Poor Ibori, with all the money he has, he should have stay pretty in Nigeria and enjoy. Look at what the fool has to go through running away from himself. There was a time he stayed in mosquitoes infected swamp with rowdy militants when he could have been at some luxurious convalescence hospital giving orders to former heads of state. He was either mad or some of his in-laws must have cursed him. But then, this man is not stingy, those in foreign countries also got their cut. If he was running to enjoy his luxuries out of the Country, he missed by a football field.

Young Bank-Ole was not even a governor, but a less connected speaker than Ibori and he got it right. So were speakers before him. The former senate presidents never ran either and one of them, late Okadigbo, was actually forgiven by his colleagues and told to sin no more. Actually, many of them end up getting another position where they can use their acquired knowledge of looting to steal some more. The former speaker, Salisu Buhari with fake Toronto degree got rehabilitated with a pardon by OBJ.

You can’t touch this! Another former governor of Lagos State with many names and aliases got off scot-free. The best they could come up with was ethics violation in a country where governors can steal the state and local government blind. We can hardly distinguish between the private and the public sectors. OBJ-Atiku gave us the evidence we knew existed all along and nothing happened to both. Of course, in Nigeria nothing happens to former heads of state including Abubarka that became a multi-billionaire in a few months before he handed over to civilian government headed by an ex- general.

After all, the worst that can happen is to ask looters to give back the national honors bestowed on them by the same looters-in- arms. Nigerians are not surprised by the bold moves of politicians to steal anymore. But foreigners keep on bugging us asking when the madness is going to stop. Little did they know that in what they call madness is what some Nigerians call salvation. Once you are in position, you can make it for life. No wonder, the old Ribadu before he became a politician, gave incriminating evidence to foreign countries on looters realizing how hard it is to convict at home.

A friend of ours actually confessed that the reason he is mad at politicians has nothing to do with corruption but everything to do with the fact that he has not had his chance to loot. Until he does, he will continue to criticize them. Once he became members of the elite, he would tell the jealous folks without access to go to hell. Those waiting their turns to loot may die waiting; like innocent poor pensioners waiting for their money.

What most people do not understand about Nigeria is that those that are faithful and devoted to a cause stand out and will never be given the opportunity to serve. It does not mean that all politicians are corrupt, it only means that there are not enough decent ones to form a quorum in order to make changes necessary to elevate the Country. If you are suspected to be clean and incorruptible, they will not let you into the treasury. Do not be surprised that your extended families would be the first to curse if you do not bring home what most politicians deliver to their families, villages, friends and cronies.

The reason for this is simple, many of the politicians with access to the treasury do not believe Nigeria will exist for long as a Country. So the earlier and more they steal before the breakup the better. Never mind their ranting about willing to die for the Country. The common people on the streets that keep Nigeria together are more patriotic than those baby-generals that have become old men waiting for their second and third terms to loot some more. It is the only grudge IBB has against OBJ; if he could only make more.

Generals go for the loot of war that happens to be treasury in Nigeria and opportunistic politicians follow their masters’ lead. It is so insulting when they preach solutions, unity and corruption to those that have never stolen a penny. The only unity they believe in is sharing loot within a cartel and use ordinary patriotic Nigerians against one another to occupy them, fight their wars and flame ethnic intolerance. Poor folks are manipulated to secure and perpetuate themselves in power while thugs turn on one another.

This is a Country where the Attorney General has come dirty claiming the only solution to corruption in high places is to negotiate with them to get back some of their loot. If that is not a defeatist resignation with selfish end of receiving some of the loot, the Attorney General must be a wise guy. But then, it is the greatest looter that gets to nominate the Attorney General. So we cannot expect him to be on the side of the angels, saints or ordinary Nigerians fighting to make ends meet.

As much as Nigerians have tried all they could in the past, they need to regroup and turn on these people. Those that are waiting for their turns to steal will be dead before they get the opportunity. They stand a better chance and a shorter waiting period if they revolt against status quo. Nobody gives up power without a fight. Nigerians do not have to do it the Arabian or the communist way. We can do it the African way.

There is a good start in the right direction. Both in the South and the North, young people are making it difficult for few politicians to celebrate at parties for their children’s weddings, coronation of “thieftaincy” titles, birthdays and other “hariya”. They need to include those thieving contractors and bankers as well. Young men and women have more stakes in Nigeria than their leaders. Get a handful of sand and throw it into their midst raining it on their happy hours.

How can we watch them use our money in front of us to aggrandize themselves, their children and their cronies while we fight one another and lynch ordinary petty thieves on the streets? It is not enough to just fight destroying the same environment we need to survive by polluting it. Nigerians need to fight the target of misery and eradicate the fire burning the Country from the source.