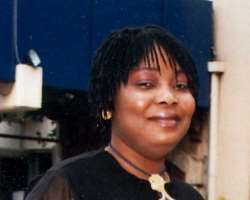 Barely few days after the burial of Remi Abiola, a veteran actress who died in America, another Nollywood personality, Omoladun Omidina who was known and called Kenkenlewu, wife to the comic actor, Babatunde Omidina a.k.a. Baba Suwe is dead. The cold hands of death snatched her away at exactly 6.00am.
Moladun was said to have been found slumped with blood coming out from her mouth and nostril in her room at their Omidina's Home in Ikorodu area of Lagos.

Information we gathered after the rumour of her dead has it that, her death has spiritual undertone as she was supposed to be at the UK Embassy in Lagos today for her traveling. Before now, some family members who confirmed the state of her hearlth told us that the mother of two had been feeling so dispirited for days now and that it was on this ground she wanted to travel for medical check up.

Doctors who confirmed her dead told the family that she died of hypertension. You may wonder what kind hypentensive attack the very convival Nollywood actress could have if not spiritual. Well, as you are reading this, the entire household of the two Nollywood personalities, Baba Suwe and Omoladun, have been thrown into perpentual mourning mood as all calls to the husband were not answered.

Some of the stalkeholders in the industry like Jide Kosoko and others have since paid the deceased husband a visit as a mark of respect for the dead in Africa. Meanwhile, fears has already griped a whole lot of the Nollywood actors who got wind of the mysterious incident this morning as death seems to be gradually having its toll on the top shots in the industry. While the remains of the pleasant, down-to-earth and articulate actress was buried according to Islamic rite this evening, the question on everybody's lips is 'WHO IS NEXT?