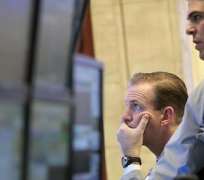 Stocks closed higher on Tuesday for a second day in a row as late-day news about Europe sparked an afternoon rally that erased early weakness.

Italy's president said Silvio Berlusconi, the country's prime minister, would resign after a new budget law was approved. Equities had hoped for a resignation, which is seen as clearing the way for a leader who will act more aggressively to tackle the country's debt problems. The PHLX Europe sector index .XEX, which includes major European shares, advanced 1.8 percent.

Trading had been choppy for most of the day after Berlusconi won a vote on the ratification of the budget, but he failed to obtain an absolute majority in the Chamber of Deputies, leading to calls for him to step down.

Despite the stock market's jump on the news, many analysts expect recent volatility to persist.

"The optimistic view is that this is what was needed, we'll get new blood that will allow us to start being constructive and moving on reform," said Mark Lookabill, wealth advisor at Carson Wealth Management in Omaha, Nebraska.

"But there's also a pessimistic view that doesn't care who is in charge, thinking we'll just get the same old thing with no new credible plan ... when the pessimists come in questioning what happens from here, we could move right back down."

In Monday's session, equities traded erratically until Juergen Stark, a member of the European Central Bank's Executive Board, gave an optimistic timeline for when the crisis might be resolved. Wall Street then staged a late rebound to end higher.

The CBOE Volatility Index or VIX .VIX, Wall Street's so-called fear gauge, fell 7.9 percent and is down 8.7 percent so far this week.

With little on the U.S. economic calendar this week and earnings season drawing to a close, investors' attention was fixed on Europe. According to Thomson Reuters data, among the 442 S&P 500 companies that have reported earnings so far, 70 percent topped expectations.

U.S. markets have been closely tied to the euro's fortunes while volatility has been tethered to sovereign debt. The euro hit a session high against the dollar ahead of the Italian vote.

In corporate news, an experimental antidepressant from AstraZeneca Plc (AZN.L) and Targacept Inc (TRGT.O) failed to meet the goal of changing a key depression rating score in the first of a series of pivotal clinical trials. Targacept shares plunged 60.2 percent to $7.61.

Volume was light, with about 7.13 billion shares traded on the New York Stock Exchange, the American Stock Exchange and Nasdaq, below last year's daily average of 8.47 billion.

Advancers outnumbered decliners on the New York Stock Exchange by a ratio of about 3 to 1,, while on the Nasdaq, more than two stocks rose for each one that fell.