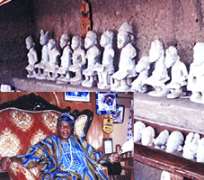 For centuries, they have confounded every mind, befogging each soul with their mysterious presence. Since their discovery 236 years ago in a thick forest near the community, no one has been able to solve the raging puzzle: who carved the Esie statues?

Esie is a sleepy community in Irepodun Local Government Area of Kwara State. Inside the Esie National Museum, the first museum in the country, stand the mysterious stone images whose origin has remained unknown till date.

The statues weigh between 0.55 and 104 kilogrammes, and they stand between 14 and 20 centimetres in height. Some are male while others are female. Some are seated on stools even as others are on their knees. Some of them are garlanded with beads. Others are either playing some musical instruments, holding assorted weapons of war, including arrows and machetes. There are those posing as if in deep meditation.

So how did these statues suddenly arrive in the lives of the men and women of Esie? It was gathered that even the dwellers of the town have been unable to explain their origin. Around 1775, a powerful hunter and founder of the town, Baragbon, had discovered the statues near the community. Unable to fathom what he had seen, he rushed back home and intimated the people. As would be expected, the oracle was consulted and the people promptly moved the bizarre objects into town, after the necessary sacrifices.

Baragbon, it was learnt, was a strong hunter who usually stayed for many months in the forest on hunting expeditions. It was on one of such trips that he accosted the strange, awe-inspiring objects.

The hunter was said to have discovered the statues seated in a semi circle, with one in the middle. It was as if the statues were having a village meeting, with their king or leader sitting in the middle,s presiding.

After they had consulted the Ifa oracle, the people were assured by the priests that the mysterious collection would bring no calamity to the town. In fact, they were told that the images would bring fame to the land and would protect Esie and its people from any harm. The statues soon metamorphosed into gods for the people, and a chief priest was appointed to supervise the worship of the deities. Until Islam and Christianity came to displace the gods, Esie dwellers consistently worshipped the statues.

To place it on record that such a discovery was made at the site, a popular tree, famously called Peregun in Yoruba land, was planted at the place in 1775.

Researchers said more of such statues are still lying buried in the ground.

In 1945, 170 years after Baragbon made his epochal discovery, the British Colonial Government established Nigeria's first museum at Esie. The reason was to help preserve the soapstone statues discovered by the people of the town in 1775. Little wonder the museum is known as the mother of all museums in Nigeria. Mr. Stephen Ibecheozor is the current curator at the museum.

The mysterious images are not the only unique things about Esie. The Igbomina (Yoruba) town parades other historical sites. Some of them are the Cathedral Church of Saint Michael (Church of Nigeria, Anglican Communion), which is more than 100 years old, the old palace of the monarch, Elesie, the tomb of past Esie monarchs at Agbo Ile Ooye and the final resting place of Baragbon at Oke-Sanlu. A monument with a plaque that lists the names of all past Elesie has been erected at the place. Also in the museum is the shrine previously used for the worship of the images before Christianity and Islam stopped such practices.

Another interesting thing about the Esie statues is the different facial marks belonging to different peoples in other parts of Africa, signifying that the mysterious carvers must have had a contact with the various peoples long before the statues were made. That, along with the hair styles on the statues, suggested some link between the Esie statues' carvers and people from places like Benin, Nupe, Ghana, Egypt and Sudan, among others.

Till date, scholars and archaeologists from around the world are struggling to find a likely solution to the puzzle of the mysterious statues of Esie. But one thing they are all agreed on is that the soapstone statues of Esie are quite unique and awe-inspiring.

Professor (Mrs) Bolanle Awe, celebrated scholar, historian and chairperson of the Esie Monuments Festival Committee, absolutely agreed. Her words: 'Apart from being the mother that gave birth to all other museums in Nigeria, the unresolved mysteries of the Esie Soapstone Statues reinforce the unique point that they represent an indispensable link to key epochs in the history of mankind.'

Professor Awe said the committee was established by culture-conscious indigenes of the town with a view to ensuring the preservation, protection and projection of all Esie cultural heritages for the benefit of the people and the community. The group also plans to sensitize the necessary authorities to the various problems confronting the museum.

The committee, she said, would be doing this through the Annual Esie Monuments Festival.

She also explained that tourism can be a major revenue earner for the country. 'Tourism has been the mainstay of many thriving economies in Africa and elsewhere,' she noted. 'It is a sustainable revenue earner that will remain long after the oil wells would have dried up. Compared to oil, tourism requires far less amount of resources to develop. It is devoid of all the negative environmental impacts that are usually associated with oil and once fully developed, tourism offers the widest possible prospects for job creation within the local and national economy.'

She urged Nigerian governments at all levels to develop the country's cultural heritages instead of 'promoting a deliberate policy of cultural amnesia and expending huge resources to encourage the patronage of less-significant foreign tourist destinations.'

National Secretary of the Committee, Mr. Ololade Oyeyipo, said the festival was actually started in 1850, noting that the new modernised festival started in 2005. That was when the 60th anniversary of the establishment of the Esie National Museum, the first Museum in Nigeria was celebrated.

He said local and foreign tourists had been visiting the place to see the Esie stone images for many decades even before the establishment of a museum in the community. According to him, in 1912, the respected German traveller and anthropologist, Leo Frobenius, had visited the site of the museum where he was reportedly astonished by the size and sophistication of the stone carvings.

The next festival is billed to commence on February 16, 2012. The three-day event will start with an International Workshop/Launch at Kwara Hotels, Ilorin, while there would be a flag-off of hunting expedition, food fest and traditional musical and cultural displays at the Esie museum on the second day. The grand finale will be on February 18.

'With the envisaged full support and partnership promised by the Federal and Kwara State Governments, the Custodian of all Esie Monuments, His Royal Highness, Oba Yakubu Babalola Egunjobi II, with the Esie Monuments Festival Committee, is set to host the world next February. We invite all lovers of culture to come to Esie and enjoy themselves,' Oyeyipo said.