Living With Your Choice 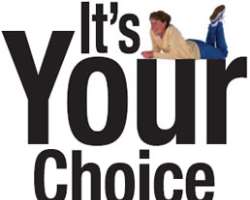 Life is all about choice no matter which way you look at it. Day in day out, you keep making choices and this is what reminds you there is still breath and soundness in you.

It was fascinating to hear from my secondary school teacher years ago about the strength of your choice. He said “..fail to prepare, you prepare to fail…” Confused and anxious, I quickly asked what he meant by that saying and he gladly explained: “As exams are approaching, if you study well, you'll pass, but if you don't, you are simply preparing yourself to F-A-I-L.”

Going by what he said, whether you chose to study or not, you are making preparations toward a goal—success or failure.

This leads us to where we can say that making choices in life is inevitable. On the other hand, we have been wired as humans to make choices quite effortlessly, may be because we believe some things are simple or we are too familiar with them not to make mistakes.

Have you considered racing to work on a Monday morning with a lot of things awaiting you including staff briefing for the week and you are considering which route to take and land the office in a couple of minutes? Oh yes, your normal route is relatively free and it takes less time to get to work. But on this day, your driver says he can see a long queue spilling from a filling station on a nearby street on to the route which may affect or delay your move. But out of over confidence, you insist he goes ahead and finally you are stocked.

How does it feel? Bad decision! But because you pay the guy's (your driver) salary, he could not rob it in well with you that your decision backfired. That was just a simple analogy drawn from everyday living but the choice I am going to handle this season has to do with a lifelong commitment called Marriage.

We could be waiting forever if we try to count how many people are regretting the choice of their marriage partners. If you are bold enough to ask them why they made such a horrible choice, you'll probably be shocked to hear what pushes people around.

Here, I purposely want to exclude people who had no say over their choice of spouses, married according to tradition, at birth or compelled to say yes to somebody you barely knew or wanted around you.

The focus is mainly on that choice you thought was splendid but as the years went by, what you saw became a mirage and the marriage threatens to fall. How should you handle that?

Karly sighted Joan in a shopping mall somewhere in America and immediately, he realised that was his dream woman passing—her shape, height, complexion, hair length and total composure—nicely met what he has been describing as a woman of his taste.

Ignoring his two brothers, Karly ran after this damsel and stood beside her to confirm his suspicions. True to it, Joan was lovely to behold. “Hello,” said Karly as he perused Joan's smooth face. The defenceless girl just answered “hi,” thinking it was one of those greetings she gets around town as she walks down the road, but to her surprise, this greeter, Karly, seemed to be looking for something a bit more than 'just hello.' He wanted to spend some time with her, tell her about himself and finally win her love.

Joan, on the other hand, had been through so much disappointment in life as a result of her father's abandonment and vowed never to commit her life to loving any man until she was sure he would be there for her despite all odds.

This posed a serious problem on Karly's effort trying to convince Joan she meant the world to him. Finally, she succumbed to his advances after many months of observation. As they got to know each other, Joan noticed that her husband-to-be loved alcohol and smoking, so she told him that was one thing she could not stand in a guy. Not only that she hated its smell, but she was also asthmatic.

Karly naturally offered there was nothing he could not give up for his baby. Trust love, when Joan heard this, it fired her love for him. Their next date was on a Saturday. Staying home all day without smoking was really hard business for Karly, so he invited his brothers to engage his time with games while he waited for Joan to ring and confirm her coming.

As soon as Joan left, Karly pounced on his cigarette as if he was just let out of a cage. The rest of their courtship continued like this but once they got married, Karly admitted he needed to continue with his stuff, so he'll hang out with friends and have a good time before coming home.

His wife could still suspect Karly was smoking as he could hide the sticks but not the smell. At that point, Joan confronted her husband, reminding him of the promises he made to stop drinking and smoking, but Karly said it was his life so she could do nothing about it.

He tried to make her understand that love should not be affected by little things such as smoking or drinking. Joan, on her part, felt betrayed that she wanted to end the marriage.

In your sincere opinion, should this marriage continue? I say YES. Why? It was Joan's choice to spend the rest of her life with Karly. Note this: People tend to get back to familiar habits during pressure. If she knew she hated smoking that much, a lot more care would have been taken not to fall a victim.

I'm not saying that people don't change, but what percentage really do? If there are clear danger signals in a relationship, be sincere to answer yourself if you could cope with it. If not, please don't commit yourself.

This is the conclusion of the whole matter. Men should fear and worship GOD