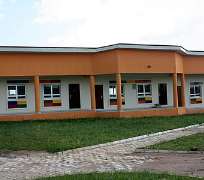 It was a unique experience for me recently in Akure, the capital of Ondo State, when just after a few months out of town, I breezed in to find some parts of the new town either completely transformed or being transformed. My perception of what I call the new Akure may be lost to a first time visitor. For me however, this is not the Akure that I was used to as a young man growing up.

But, the reality of the revolution taking place in the new Akure did not however dawn on me completely until some days after I arrived, when I visited a salon along Oke Ijebu road to have a haircut. Yes, I call it new Akure because it’s new indeed. The transformation was sudden. I could see well structured shelters at designated bus tops. These shelters were painted in the state’s official colour, and so inviting were they that people could be tempted to turn them into relaxation spots.

The Akure of today has changed from the Akure where I first breathed the air of life. The present Akure is different from the one where I used to help my mother hawk wares on Oba Adesida road. As a matter of fact, the spot where I used to display my wares then has given way to a drainage well designed to prevent flooding.

I was under the Clippers that good evening at the barber’s shop when a man sauntered in with his telephone handset and the charger in hand apparently to make use of the ever available power supply at the Saloon.

According to the information I gathered later, the young man has been doing that for some time and uses the opportunity to mingle with other ‘area boys’ who have formed the habit of converging on the spot every evening to while away the time and discuss issues of public interest.

As members of the informal gathering gradually settled down for their usual discourse, one of the men, unconsciously setting the tone for the evening’s discussion gleefully muttered aloud how beautiful the new Akure will be at the completion of the dualisation of the Arakale road, thus hitting right at the thought that was playing in my mind at that moment because of what I had observed on my way to the saloon.

While driving through the now wide and beautiful Arakale road, memory of the dilapidated houses that used to occupy the better part of both sides of the road shot back to my consciousness. I could remember my usual walk from our Aiyedun Quarters home through Arakale to mum’s small space at the old NEPA market. The sight is now incomparable. The difference is crystal clear. The NEPA market I was used to have been completely demolished and in its place, a millennium market has sprung up. This new ultra modern market came to be as a result of the ingenuity of the State Governor, Olusegun Mimiko who is just a little over two years in office, running the affairs of the state.

Just as the agenda for the informal meeting at the saloon was evolving, unconsciously though, the free handset charging man mentioned that he almost mistook the capital city for another planet entirely when, a month before, he returned to Akure after he has been away for a long while. His time of return, just like it happened to me, was in the night. In my own case, I had been stunned with the street lights that welcomed me to the city.

It took me a while to realise that I was really in Akure and not within the Murtala Muhammed International Airport in Lagos.

Apart from the Arakale road dualisation, I also discovered that construction works were going on in virtually every part of the city I had passed through especially the Fiwashaye- School of Agric axis.

But the opportunity provided by that evening’s discussion gave me more insight into what the Mimiko administration has done to transform the town and I cannot but agree with one of the discussants, that Mimiko is performing miracle in Akure.

“But successive governments in this state have given lack of funds for the reason why they could not deliver, where is Mimiko getting money to do all the projects he is doing” queried, one of the most vocal of the discussants whose name I later got to know is Amudipe.

The young man later listed more of the projects the governor has done which must have endeared him to the public that are now rooting for his second term in office.

Prompted by the gentleman’s disclosure, I decided to pay a visit to a newly built Caring Heart Mega School which is just a stone throw from the Saloon in Oke- Ijebu.

The story of how the Mega School came into being is as interesting as it is emotional.

As the story goes, the previous dilapidated building of the then St. David’s Primary School, Oke-Ijebu had become a vault for armed robbers who stock piled their guns in a section of the school.

On this sad day however, an ignorant pupil of the school had picked one of the guns and shot at a fellow pupil who died immediately. The incident necessitated a visit by the governor to the scene and he was moved by what he met on ground. The school could as well pass for a junk yard. Good enough, the education sector is included in the governor's Caring Heart Programme, which involves the transformation of primary schools in the state to world class Mega Schools.

As such, the unfortunate killing in the school became the foundation for the new Mega School. And, barely one year after the decision to build a new St David was taken; eyes can now behold a sight not comparable to any of such in this part of the continent.

Describing what I met on ground on the day of my visit could be a bit difficult because the facilities on ground are not common to primary schools in this part of the world especially in a country where public schools have almost become history. In fact, only a handful of universities could parade the kind of facilities available in the school.

For instance, it is unusual for a public school to have a state of the earth building with maximum of 25 pupils to a teacher in a class. A functional borehole and facilities that even the most expensive private schools in the country cannot boast of.

The St David’s experience is said to be just a model for the many of such that are springng up in other parts of the town in particular and the state in general. Because according to Amudipe, the governor has vowed to make private school unpopular in the state hence, his decision to rejuvenate public school system devoid of class, a school system, which the children of both the rich and the poor can co-study with no preferential treatment. The process is believed to have begun with the transformation of St David’s primary school. What I saw in the school also reminded me of my days as a pupil of St Stephens Primary school in Ijomu.

Still dazed by the sight of the Mega School, I murmured aloud my bewilderment when my attention was drawn to a jingle being aired on the radio at the time. The jingle talked about the Abiye project, yet one of the manifestations of the caring heart policy of the governor.

As I was later briefed, Abiye is the generic name for the governor’s health care delivery system.

As part of the Abiye project, I learnt that there is, now established in the state, a special hospital for expectant mothers and children christened ‘Mother and Child Hospital’.

The lure to confirm first hand some of these information at my disposal became irresistible. To satisfy my curiosity, I visited, first the Mother and Child hospital where the confessions of some of the beneficiaries confirmed what I have heard, that pregnant women get medical attention from the day of registration till about a month after delivery almost at no cost.

And as if to confirm the impact of the Abiye project on the lives of the people, few days ago the World Bank accorded the project due recognition to further boost the programme.

The Mother and Child hospital is a sight to behold with its unequalled facilities. A leveler of a sort, the hospital caters for both the poor and the rich almost free of charge without compromising standard. Surprisingly, one of the personnel on ground at the hospital revealed that over 20 percent of patrons to the hospital are from outside the state.

The hospital which has now become an international model is also being replicated in every part of the state even though it is said that most of the rural areas in the state have been provided with well equipped hospitals within the last two years that Mimiko assumed office. But these hospitals are not designed for expectant mothers like Mother and Child.

While at the premises of the Caring Heart School, I had struck a good relationship with Amudipe and it was as if we had known one another for ages. I guess he must have shown interest in me because he read correctly that I was curious to know more about the feat of the medical doctor turned politician who goes about the alias of Iroko. And he was ready to goad me on so that I assimilate more of the Iroko revolution.

Through Amudipe, I learnt that the Mimiko government has taken the bull by the horn and embarked on aggressive Housing projects which are still ongoing with about 276 housing units ready for occupation by December this year, thus becoming the only government among the successive ones in the state since 1983 to have done so.

The revolution, I was also told, is not limited to Akure as many projects are said to be going on simultaneously in Owo, Ikare, and Ondo town. There is a farm settlement in Ore at the instance of Iroko, where over a thousand graduates have been gainfully engaged.

With what has become of Akure and the state in terms of facelift and other infrastructural developments since the Mimiko revolution began, and the many that are still being worked on, one can imagine how more inviting the state would have become at the expiration of the caring heart governor’s tenure. This indeed is the Iroko revolution.