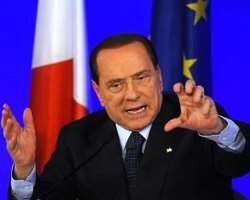 ITALY'S PRIME MINISTER SILVIO BERLUSCONI GESTURES DURING A NEWS CONFERENCE AT THE END OF THE G20 SUMMIT IN CANNES, NOVEMBER 4, 2011.
Listen to article

Prime Minister Silvio Berlusconi defied huge pressure to resign on Monday, desperately playing his last cards to save his crumbling government as fears over Italy's instability hit markets across Europe.

Berlusconi denied reports by journalists close to him that he would resign within hours, immediately reversing a brief recovery in stock and government bond markets battered by political uncertainty in the euro zone's third economy.

Yields on Italy's 10-year bonds hit 6.67 percent, their highest level since 1997, at one point on Monday, close to the 7 percent level seen as unsustainable for Italy's huge debt, one of the world's highest. European stocks were also hit by the turmoil.

The movements indicated how much markets saw Berlusconi's departure as the only way to reduce the pressure on Italian bonds which has fueled a revolt in his party, although there is deep uncertainty about what would follow if he stepped down.

Government bond prices would recover and the yield spreads would narrow by a full percentage point if the government should fall, according to a Reuters survey of 10 fund managers last week.

Political sources said a late Sunday meeting of leaders of Berlusconi's PDL party had urged him to resign because of a major party revolt but he was still not convinced. However a confidence motion is likely this week in parliament.

Government minister Gianfranco Rotondi said on Monday he was optimistic the parliamentary majority would hold. Otherwise Italy would have to go to the polls, he said after meeting Berlusconi.

The prospect of early elections, opposed by many PDL deputies including rebels, is one of the last cards left to Berlusconi. He said those who brought down the government at a time of national peril would be traitors who would make economic reforms more difficult.

The 75-year-old media magnate and his closest aides spent the weekend trying to win back the support of enough deputies to avoid humiliating defeat on Tuesday in a crunch vote to confirm a state financing bill which he has already lost once.

Chances of defeat in this vote seem to be receding although if he did lose it, Berlusconi could either resign immediately or be ordered by President Giorgio Napolitano to call a confidence vote.

The center-left opposition may abstain in the Tuesday vote to expose Berlusconi's lack of support without torpedoing an essential measure.

NO CONFIDENCE MOTION
But the opposition is preparing a subsequent no-confidence motion that would likely be held within days.

Otherwise Berlusconi faces a confidence vote he has called himself in the Senate around November 18 on new measures promised to impatient European leaders to boost Italy's chronically stagnant growth and cut its debt.

Despite Berlusconi's unflinching defiance, many of those around him believe his days are numbered and that he has no chance of implementing unpopular austerity measures with an extremely fragile majority. La Stampa daily on Monday described the death throes of his government as a "prolonged agony."

Interior Minister Roberto Maroni, a senior member of Berlusconi's coalition ally the Northern League, said the writing seemed to be on the wall.

"The latest news leads me to think that the majority no longer exists and that it is useless (for Berlusconi) to be obstinate," Maroni said.

However, even if he goes, the prospects for a way out of Italy's crisis remain obscure. Berlusconi and the Northern League insist the only alternative to him is an election early next year -- which would likely push back reforms even further.

The idea of a national unity or technocrat government, favored by markets, the opposition and probably the head of state, is opposed by Berlusconi and League leaders whose parliamentary support may well be necessary for it to function.

Newspapers have estimated the number of potential party defectors at between 20 and 40, which would be more than enough to topple the government.

Berlusconi has been meeting and telephoning rebels since he returned from a humiliating G20 summit in France on Friday in which he had to agree to IMF monitoring of Italy's progress in reforms he has long promised but so far not implemented.

Italy has the third biggest economy in the euro zone and its political turmoil and debt worries are seen as a huge threat in the wider crisis facing the continent's single currency.