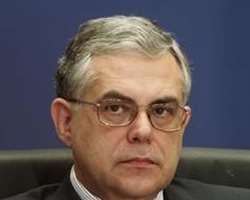 A former deputy head of the European Central Bank emerged on Monday as frontrunner to become Greek prime minister, as party leaders bargained over who will lead a "100 day coalition" to push through a bailout before the nation runs out of money.

Under EU pressure, an unaccustomed spirit of compromise seeped into Greek politics as the top parties haggled over the jobs in a government which will run Greece only until early elections in February.

A source at the opposition conservatives said nothing had been agreed yet with the ruling socialists on who should lead the government of national unity, and refused to comment on speculation that former ECB vice president Lucas Papademos would get the job.

However, the opposition source told Reuters that his New Democracy party accepted that socialist Finance Minister Evangelos Venizelos could stay in his job at a time of national crisis.

"The economic ministries, including finance minister Venizelos and his team, should stay for the sake of continuity," said the source, giving the first indication of who will occupy any of the cabinet posts.

New Democracy would also vote for the 2012 budget and back a bond swap plan contained in the bailout package, under which the value of banks' holdings of Greek government debt will be halved.

RESTORING ORDER
Whoever leads the transitional government of national unity will have a monumental task in restoring order to a country whose chaotic economy and politics are shaking international faith in the entire euro project.

European Union leaders want Greece to form the coalition quickly and push the 130 billion euro bailout through parliament, for the sake of a nearly bankrupt nation and to shore up confidence in euro zone.

Despite the sealed lips on both sides, Papademos remained a possible frontrunner for premier. An aide said the Greek economist, who left the ECB last year, had arrived in Athens on Monday from the United States where he is a Harvard academic.

Outgoing Prime Minister George Papandreou has been in touch with Papademos, a senior government official told reporters. "The prime minister had several telephone contacts with Mr Papademos in the last days," the official said.

Papademos oversaw the nation's adoption of the euro in 2002 as Bank of Greece governor before moving to the ECB, and is a well-known figure in European capitals.

Papandreou sealed a deal on Sunday with New Democracy on the crisis coalition to approve the international financial aid package. On Monday he informed European leaders, including German Chancellor Angela Merkel and European Commission President Jose Manuel Barroso, by phone about efforts to form the coalition, his office said.

The Greek leaders' immediate job is to agree the new prime minister, who must exert authority over hardened party chiefs and made decisions which will affect Greeks for a decade.

Papandreou also spoke to conservative New Democracy party leader Antonis Samaras on the coalition, and his office said more talks would follow later in the day.

In an early sign that a broad compromise will be hard to achieve, President Karolos Papoulias's plan to summon the heads of all leading parties for more negotiations on Monday was dropped after two leftist parties refused to attend.

HANDS FULL
Greeks worry that any new premier will have hands full merely getting Papandreou's socialist PASOK party and New Democracy to work together, whether or not the leaders join the cabinet.

"The new prime minister will ... not give the impression that he is in charge. Everyone will be looking to the two party leaders who will be running things behind the scenes," he said, adding: "The civil service won't implement any decision and everyone will be waiting for the election."

At least the two parties agreed on the likely lifespan of the coalition, deciding in the early hours of Monday morning that February 19 would be the preferred date for an election. Venizelos went later on Monday to explain Greece's plans to his fellow euro zone finance ministers at a meeting in Brussels.

Brussels has piled pressure on Athens to approve the bailout, a last financial lifeline for Greece which faces big debt repayments in December. The EU fears that the Greek crisis will spill into much bigger euro zone economies such as Italy and Spain -- which would be far harder to rescue.

Papandreou, who sealed his fate last week with an attempt to call a referendum on the bailout which backfired, will stand down when the new government takes over.

IMMENSE SUFFERING
Greeks have suffered immensely in the two years that Papandreou has run the country. International lenders have demanded wave after wave of pay and pension cuts, plus tax increases and job losses in return for emergency aid. This has helped to keep Greece in four successive years of recession.

The Communist PAME labor group will hold a rally in Athens on November 10 to oppose a new government which it said "has the task to save the monopolies and crush the popular movement."

"They want to vote through the new bailout... which will leave Greek people with their hands tied for many years."

The ESEE retail federation expressed qualified relief that politicians were coming to terms, calling for "consensus and cooperation so as to save what can be saved in the short time left," it said in a statement.

Greek bank shares, the country's best benchmark of market sentiment with the government shut out of bond markets, rose 3 percent on the coalition deal.

A new coalition would be sworn in and hold a confidence vote within a week if all goes to plan, the government says.

Many Greeks remained skeptical about a coalition tasked with imposing more austerity to tackle a huge budget deficit.

"Hurrah, we are saved!" said plumber George Vihos sarcastically. "Why should we celebrate now that they will make sure we bear the pain?"

On Sunday European Economic and Monetary Affairs Commissioner Olli Rehn told Reuters that euro zone finance ministers would insist on hearing a plan for a unity government from Venizelos at Monday's Eurogroup meeting.

Papandreou had sought the referendum to show that harsh cuts demanded in the bailout had public support, but the risk that a "no" vote could bring about a sudden bankruptcy caused mayhem in markets, anger in Europe and rebellion in the ruling party.

He soon ditched the idea and won a confidence vote in parliament, but only after promising to make way for the national unity coalition.