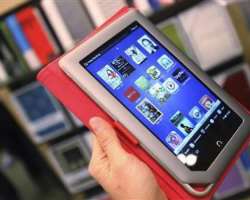 Barnes & Noble Inc introduced its first ever tablet to compete with Amazon.com Inc and Apple Inc for holiday sales.

Barnes & Noble will charge $249 for the Nook tablet, which is expected to hit the shelves late next week. That compares to the $199 price tag on Amazon's new Kindle Fire, which ships Nov 15.

Lynch also said that the 8 gigabytes of storage offered by Amazon's Kindle Fire tablet was "deficient."

Barnes & Noble has faced years of shrinking book sales, so it has invested tens of millions of dollars to develop the Nook to reinvent itself as readers move to digital formats. It claims to now have about a quarter of the digital books market.

The company's shares were down 7 cents at $11.54 on the New York Stock Exchange.