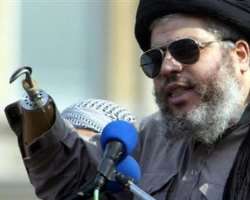 Prominent Islamic militants in London were targeted by a private investigator working for Rupert Murdoch's now-closed News of the World tabloid, according to data obtained by Reuters.

The data, which was collected by British government investigators in 2006 as they looked into alleged media abuses, show that a News of the World journalist commissioned private investigator Steve Whittamore to gather data on Abu Hamza and Abu Qatada, two of London's most controversial militant clerics.

Mohammed al Massari, a Saudi dissident who lives in London, was also targeted in the same way, the data shows.

The information does not indicate whether the newspaper or private eye hacked into any of the militants' voicemails, an illegal tactic used by another detective employed by paper who was jailed in 2007 along with a reporter for hacking into the voicemails of celebrities and aides to Britain's royal family.

On Friday, London's Metropolitan Police said its investigators had so far identified 5,795 different individuals as possible victims of News of the World phone hacking.

Sources at News International also said a journalist for its surviving tabloid daily, The Sun, had been arrested on Friday in connection with inquiries into bribery of police.

The sources said Friday's arrest was the first for work performed for The Sun. The News of the World was shut in July after reports that it had hacked voicemails on a large scale, now the subject of a police investigation.

The information on the News of the World's Islamic militant targets is contained in an electronic database known as the "blue book," which was assembled by the Information Commissioner's Office, a British government agency, from evidence seized in a 2003 raid on Whittamore's home.

The database is undated but is believed to cover a period between 2000 and 2003. It offers no clues on what, if anything, the News of the World dug up on the targets.

The paper ran a story in 2003 exposing what it said was a bigamous marriage by Abu Hamza, which the newspaper said had helped him to win the right to reside in Britain. The woman he wed later denied that she had already been married at the time.

"I DIDN'T ASK"
Whittamore, who could not be reached for comment, was convicted in 2005 of passing information to journalists from a confidential police database, and sentenced to probation.

He told BBC Radio last year that he had sometimes been asked to find confidential information, such as bank or telephone account details, work that he sometimes contracted out.

He said he "didn't know and didn't ask" how some of his associates obtained information.

In the wake of the September 11, 2001, attacks by al Qaeda militants on New York and Washington, both U.S. and British intelligence agencies monitored London-based militants with suspected al Qaeda links, including Abu Qatada and Abu Hamza.

Videotapes of the sermons of Abu Qatada, a Jordanian-born cleric, were found in an apartment in Hamburg, Germany, used by militants who led the attacks.

In the wake of the attacks, Abu Hamza, who was born in Egypt and lost both hands and an eye while reportedly clearing mines in Afghanistan, gained notoriety for both his striking appearance -- he has hooks for hands -- and for fiery sermons at the Finsbury Park mosque in North London, several of whose worshippers became targets of counter-terrorism investigations.

Both Abu Hamza and Abu Qatada were subsequently detained by British authorities. Abu Hamza was convicted of charges including soliciting to murder and fomenting racial hatred, and then became the subject of a U.S. extradition request.

Abu Qatada was detained and ordered deported to Jordan.

Both remain in British custody pending appeals to a European tribunal. Their lawyers could not be reached for comment.