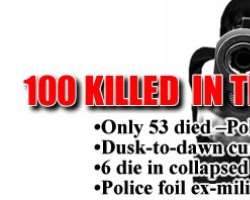 No fewer than 100 persons died in separate attacks in Potiskum and Damaturu, the Yobe state capital following hours of bombardment by the dreaded Boko Haram Islamic sect.

Among the victims, according to Sunday Sun findings, were a professor, a lecturer with the Federal Polytechnic Damaturu and a corp member, Eucheria Remigu serving with the Yobe State Ministry of Local Government and Chieftaincy Afairs. Eucharia was a psychology graduate.

Officials at the Damaturu Specialist Hospital told Sunday Sun that relatives of the victims besieged the hospital morgue yesterday morning to identify their corpses. One of the officials who preferred to be anonymous hinted that facilities at the morgue were over-stretched, adding that many corpses were still on the ground due to lack of space.

It was gathered that most of the casualties were policemen while a few civilians were involved. 'I think some of the civilians fell victims probably because they were close to the scenes of the attacks or were hit by stray bullets. But the scenario at the hospital morgue is shocking. This is all I can tell you now,' the official disclosed in a telephone interview.

The State Commissioner of Police, Sulaimon Lawal who earlier scheduled a briefing with journalists for 12 noon was compelled to reschedule the exercise so as to hold talks with the state deputy governor, Alhaji Abubakar Ali on ways to curtail further attacks by the Islamic sect. The state governor, Alhaji Ibrahim Gaidam was in Saudi Arabia to perform this year's Muslim pilgrimage when the incident occurred.

When he eventually addressed newsmen, the Police Commissioner said that only 53 persons were killed in the separate attacks. According to him, 11 of the casualties were policemen, 2 soldiers and 1 Customs personnel. Others include I Civil Defence Corps, 2 Road Safety officials and civilians.

He said the Boko Haram sect however lost seven of its men, adding that the bombers that attacked the anti-terrorism squad office came in a CRV sports utility vehicle. He said that some policemen who were conveying one of the suspected bombers allegedly lynched by residents were ambushed by some Boko Haram men.

He said two policemen and two soldiers were injured in similar attacks in Potiskum.

Meanwhile a dusk to dawn curfew has been announced. The curfew according to the CP would run between 7 pm and 7am until the security situation in the state improves.

Police sources claimed some suspected members of the sect were arrested yesterday afternoon but there was no official confirmation from the police commissioner. As at the time of filing this report yesterday, many of the residents were still indoors even as repeated gunshots were heard in different parts of the town. However, it could not be ascertained whether the gunshots were fired by the mobile police on patrol or members of the sect. Damaturu residents were awakened to the presence of the Boko Haram men in the town when the office of the anti-terrorism squad of the Nigeria Police in the city went up in flames at about 5 pm on Friday. Few minutes later, the Boko Haram men stormed the State Headquarters of the Nigeria Police along Gujba road and bombed the newly renovated building with explosives, killing scores of policemen in and around the building.

They also attacked about seven churches around the New Jerusalem area. The churches attacked ECWA Church, EYN, Living Faith, Catholic Church, Anglican and Mission Church. 'They took everybody unawares because the state generally has been peaceful despite its proximity to Maiduguri, the headquarters of the Boko Haram men. Some of our members were holding meetings while a few were in the church praying when the attackers came,' a member of the Catholic Church told this newspaper.

He said residents started hearing gunshots and blasts from explosives at about 5pm on Friday and were later shocked to learn that the police headquarters, Damaturu Police Station and two of the banks around the police station located in the heart of the town had been attacked.

The sect also carried out similar attacks in Potiskum, a nearby commercial town about 120 kilometres to Damaturu, the Yobe state capital. The Yobe attacks came barely seven hours after the sect threw residents of Maiduguri, the Borno State capital into confusion when triple explosions occurred at three different locations within the metropolis. Attempts to bomb the headquarters of the military-led Joint Task Force were also foiled by soldiers as three of the suspected bombers were gunned down.

But the JTF spokesman, Lt Col. Hassan Mohammed said the suspected suicide bombers came in a SUV at about 11:30 am and had attempted to force their way into the JTF headquarters, but on meeting resistance from the men at the gate, the bombers hurriedly detonated the explosive which eventually consumed them in the vehicle.