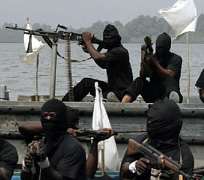 Pirates have released an oil tanker and its crew they seized off the coast of Nigeria a week ago, the Nigeria Maritime Administration said on Saturday, the latest in a string of attacks on ships in the oil-rich Gulf of Guinea.

Contact was lost with the crew of the Halifax, an oil products tanker managed by Greece-based Ancora Investment Trust Inc, around the time it was hijacked last weekend. An official said it was located 60 miles (97 kms) off the coast Port Harcourt before it was hijacked.

Experts say recent attacks on ships in the Gulf of Guinea threaten the region's position as an emerging trade hub which is an increasingly important source of oil, metals and agricultural products such as cocoa to world markets.

Pirates in the Gulf of Guinea, which stretches from Guinea to Angola, tend to raid ships for cash and cargo rather than hijacking the crews for ransom like their counterparts off the coast of Somalia, analysts say.

The frequency of attacks, while not as high as off the Somali coast or surrounding Indian Ocean, is on the rise. Earlier this month, pirates hijacked a chemical product tanker and kidnapped the crew off the Nigerian coast.