2011 Calabar Festival Will Be Bigger And Better - Commissioner 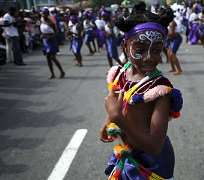 CALABAR, November 05, (THEWILL) - As the 32-day Calabar Festival approaches, the Cross River State Commissioner for Information and Orientation, Mr. Patrick Ugbe, has assured that this year’s edition of the event will offer a whole lot more than it has in the past years.

The Calabar Festival which kicks off on November 30, 2011 and ends on January 1, 2012, has over the years grown in popularity and acceptance across the country and even internationally.

The annual event which debuted about a decade ago, and has the 2-day carnival as its high point, has over the years witnessed innovations which have made each year’s event feel like a new experience. In keeping with the spirit, Ugbe said, and assured that “this year, it is much bigger and better than the previous ones we have been having.”

Last year’s edition of the event had recorded over 1.4 million visitors to the state.

According to him, “The Calabar Festival this year will be much bigger than the previous ones we have been having. Artistes lined up are more exciting this year. We expect that the carnival this year will be much bigger than last year’s, because it has been growing year after year. Last year there was virtually no space on the streets. This year we expect it to be bigger, but we are ensuring that everything will be in place.”

As a means to further boost the festival this year, he said, the state will first and foremost present an event tagged, “A Glimpse of Destination Cross River” which will

hold in Abuja.
“We did the first one last year in Lagos. It was a huge success. What we are going to do is to showcase what “A Glimpse of Destination Cross River” is all about and what it has to offer – the 32 day Festival which climaxes with the 2 day Carnival parade which is the biggest street party in Africa,” he said.

According to the commissioner, part of the strategy to keep the event refreshing will be rebranding the state’s tourism programme.

“The tourism brand is going to change. We are going to unveil our tourism brand when we take “A Glimpse of Destination Cross River to Abuja and after that day, our tourism will wear a new look, new brand identity and we will have a new slogan. You must retool, constantly if you want to position yourself to be the number one which we are.

You must stay ahead and the only way to do that is to reinvent yourself and that is the essence of rebranding,” Ugbe added.