ON THE RECONSTITUTION OF FEDERAL BOARDS 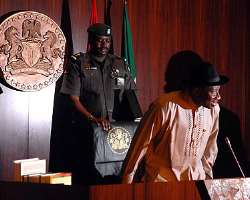 So, in the best interest of the country and its good people, the President should get closer to the masses to win their love, admiration and support. He must be reminded that God's real love is with the poor and the down-trodden. He has no option than to succeed because he has come at a time when any little positive change will distinguish him from the past. These were my words in my article titled “What Mr. President must do to succeed”, which was published in many media outfits, including Leadership under the title, “Agenda for Mr. President.”


With the dissolution of the boards of federal parastatals and agencies, it is another tempting time, yet another opportunity for Mr. President to make careful selection from amongst the Nigerian people who will assist him in meeting the yearnings of the citizenry, as well as positioning Nigeria for the hard competition in world affairs.


The constitution of the federal cabinet had come and gone and most Nigerians were quite unmoved with the exercise. While there was great agitation for new faces in the cabinet, specifically from the younger generation, it was not far from being the truth that many of those who made the cabinet list, especially those reappointed from the immediate past one, were basically on merit.


Now it is membership of federal government agencies. Although the nomination into the federal cabinet was much more exclusively done by the state governors, special advisers to Mr. President and the Vice President were made by the President and his Vice, yet there was no Igbo Muslim found worthy to serve in those capacities.


In my article entitled: SGF: Choice of Pius Anyim and matters arising, optimism was high that Senator Anyim would deliver for Nigerians - Christians and Muslims alike. It is time the Muslim minority of the Southeast is carried along in the government of Nigeria. It should please every Nigerian that the minorities are not relegated to second class citizens merely because of the belief they proclaim.


President Goodluck Jonathan inaugurated a four-man committee on the composition of the expected boards. In as much as it is good news that the committee is chaired by Vice President Namadi Sambo who many Nigerians can attest to have the interest of the country run in his veins and arteries, it is also encouraging that the committee has the Secretary to the Government of the Federation (SGF) as its secretary. Sambo is believed to be one of the rare in the political elite of today who are detribalized and religiously tolerant. Against all odds, he single handedly delivered Kaduna state to a Christian Governor! Can this happen in the Southeast?


With other members as Senate President, David Mark represented by his deputy, Ike Ekweremadu, Speaker House of the Representatives, Hon. Aminu Tambuwal and the National Chairman of the Peoples Democratic Party (PDP), Abubakar Baraje, there are flickering hopes that the best from Nigerians would be called to serve their fatherland through the federal agencies.


It was true for President Jonathan to describe the committee as one of the most powerful. The challenge to be Nigerian, unlike the past, in forming these boards will characterize the success or otherwise of the agencies in the next four or five years. Yes, the federal cabinet is made up of very few personalities. And the Igbo Muslims lost out completely. But memberships of the federal parastatals and agencies run into thousands. That is why two or three Igbo Muslims should make the lists.


In the same vein that the President thanked other citizens for accepting the responsibility of serving our nation in different capacities, it is our hope that he will consider Igbo Muslims for appointment into the various boards, not only as members but equally as chairmen and secretaries. There can hardly be any qualifications required for such appointments which they do not possess, including party loyalty and attachment.


Let me cite instances of what discrimination against minorities could result to. Under a title, France: Marginalization of Minorities Causes Alienation and Ethnic Strife, a journalist wrote: Here is an example of why marginalization of minorities is bad for the whole of society…while the French society puts pressure on immigrants, accepting nothing less than full assimilation (not mere integration), that society never accepts foreigners who have a different language, different religion and different customs. The result is a no-win situation that leaves many youth feeling alienated.


In Canada, the people pride themselves that they are a cultural mosaic; each group retains its cultural identity while being a full member of the larger Canadian society. Integration and not assimilation, they believe, is key. Pretending that all is well and that there are no problems is just as bad as alienating the minorities. Like freedom and democracy, a multicultural and multi-religious society takes effort from all sides.


B.A. Kader wrote on the Marginalization of the minorities, with special focus on Malayaga (Hill Country) Tamils, saying “As an activist-researcher, I was forced by the political circumstances of the country, Sri Lanka, to conduct number of researches on the roots of ethnic conflict. In the course of my study I came across constellation of writings on the discriminations imposed on the Tamil speaking communities by the Sinhalese elites, which ranged from language issue to the establishment of state sponsored colonies. Nevertheless, I was surprised to note that one vital factor, which had played a crucial role is marginalizing the political strength of the minority communities of Sri Lanka.


It is left to these great and powerful men of the Nigerian people to show utmost consideration for the down-trodden, ignored and constantly neglected Igbo Muslims in this national task. The problems and governance of Nigeria should be on the shoulders of all. Who knows who can sincerely reposition Nigeria.


Let this powerful committee and the Nigerian political elite consider, reason and sympathize with the Igbo Muslim citizens of the Nigerian nation?


Muhammad Ajah is a writer, author, advocate of humanity and good governance based in Abuja. E-mail [email protected]