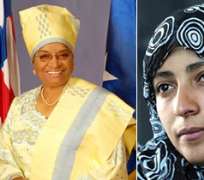 It has become commonplace for some commentators who study issues of governance and development in Africa to warn that the upsurge of public disenchantment that has occurred in parts of the Arab world could be replicated in parts of sub-Saharan Africa in the near future.

They assert that the persistent disparity between the privileged existence of the political leadership and the underclass of common people is expanding rather than diminishing. This, they say, is occurring even though it is widely assumed that representative democracy has become the main system of government throughout the African continent.

Having reversed the dictatorial trends of paternalistic one-party rule and coercive military autocracy many of the so-called democratic leaders are being accused of installing manipulative and unrepresentative electoral methods in order to remain in power.

In other words many analysts are convinced that the old style autocratic seizure of the people's mandate has simply remained in place in the attitudes of some leaders even though on the surface they promote the principles of debate and discourse as the core factors of governance. Unfortunately it is easy for these allegations to be disseminated almost without verification and the necessary sanctions of evidential proof in these days of the new information order. For this reason it is imperative that those of us who influence public thinking through our access to the media should exercise disciplinary censorship over our utterances lest we whip up sentiments, which are already volatile, and provoke public action that can breed conflict. In my recent observations while touring some parts of West Africa, especially Liberia, Sierra Leone and Ghana this stricture of the need for caution in our utterances was brought home to me most effectively.

While I witnessed an election of unprecedented fairness and order in Liberia I also observed that the presence of some public dissatisfaction has been harnessed by opportunistic elements to create a heady brew of noisy dissent. The ever-present bedlam of public disenchantment can easily be deployed to destabilise the status quo even though it does not necessarily represent the true state of things in any country. The democratic process is prone to encouraging this form of opposition as a means of gaining relevance rather than building genuine consensus and promoting true values. While the first round of the Liberian elections went off without a hitch events surrounding the counting and presentation of the first results have threatened to overturn what had seemed like a signal success. A simple rhetorical error in an official letter of notification to the participants gave the main opponents a loophole through which to continue to mount claims of distrust of the process.

The Chairman of the National Elections Commission has since taken the blame for the error and resigned (a very un-African decision you might say), but this has only served to whip up more sentiments of dissent. This is a dangerous and highly symbolic circumstance that exposes the potential instability that elections can provoke in nations where regional sympathies and ethnic loyalties still play a key role in the ordinary citizen's perception of the building of political values. In neighbouring Sierra Leone I also observed that problem emerging. While the country is preparing to enter into another round of electioneering for next year's general election there too the circumstances on the ground have created a climate of distress. Events that occurred during recent political rallies could very well undermine the best intentions of the sitting government to broker a fair electoral process next year.

Throughout West Africa the conduct of elections has become an increasingly regular aspect of the political timetable in almost all the member countries of ECOWAS. It will serve us well to recollect that this was not the case for the major part of the last five decades of post independence rule in the region. In other words the development of the democratic process of selecting leadership has been gradually restored to the nations of the sub-region by the demands of the people and that has been interpreted by the political establishment as the main forum of their continued relevance.

Many of those who are now brokering the process of democratic representation were active participants at various times in the core of the more autocratic processes of governance in the past.

It can hardly be ignored that in Nigeria for example the creators of the major parties and some of the key players in the strategic consolidation of the new order are themselves people who had played major roles in military regimes of the past. Senate President David Mark is an especially prescient symbol of this syndrome although former President 'Baba' Olusegun Obasanjo, and the consummate 'wheeler-dealer' and one-time military president Ibrahim Babangida are probably the most important individuals in this aspect of Nigerian politicking of the last decade.

Both of them have wielded enormous influence over various groups involved in creating the basic framework on which the major party the PDP has been built and decisions taken by them have shaped the present structures that are in place. The suspicion that the role of public opinion as the main impulse of the existing system has been usurped by a privileged elite is fuelled by the continued influence of such figures in Nigeria's democratic processes. However the growing importance of court-based decisions as the fundamental basis on which political order stands or falls is gradually eroding this factor in Nigerian democracy.

It is increasingly relevant that both the issues on which electoral contests are fought and the nature of the process is being influenced by demands that are mounted by groups that are outside of the strict system of party followership. Although civil society is supposed to drive the process of public demand and accountability many of the actors in the political arena are not yet convinced that their task is representation of the popular view.

They are addicted to the principle of imposing a privileged view rather than attracted to the challenge of advocating a collective demand. When public advocacy groups that are concerned with specific issues such as women's rights, environmental protection, political transparency and economic transformation etc. begin to find ways of influencing the vote then and only then will true democratic relevance be installed in the social milieu of these West African nations. In Liberia this process can be regarded as having already begun because President Ellen Johnson Sirleaf has actually encouraged the process of independent advocacy consciously.

In addition to that, her standing as the first ever female President of an African nation is in itself an inspiration to the people of the sub-region. It remains to be seen whether in the aftermath of the recent election Liberia's politics will descend into acrimony or whether the politicians build a consensus of discourse and move forward instead of regressing into dissident conflict. In Sierra Leone violence has already reared its head.

The task before the incumbent President Ernest Bai Koroma is a daunting one. He must be prepared to act objectively to halt any return to endemic political violence and curtail a tendency to partisan irrationality not only among his opponents but also among his supporters. West Africa has embarked on a journey to progressive democratic governance that could easily be derailed by the claims of those who cannot handle defeat. This must be avoided at all costs and by all means. The gathering storm of dissent and challenge must represent the real will of the people not an outburst of partisan distress. That will be the real revolution when it happens, if it happens.