'NEPAD WAS A REMARKABLE VISION BY AFRICAN LEADERS.' 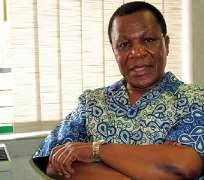 In 2001, African leaders officially adopted the New Partnership for Africa's Development (NEPAD) as the continent's premier framework for economic, social and political advancement. With the plan's 10th anniversary approaching, Africa Renewal's managing editor, Ernest Harsch, visited the offices of the NEPAD Planning and Coordinating Agency in Midrand, South Africa, and spoke with Richard Mkandawire, its director of partnerships, resource mobilization and communications.

Ten years after the New Partnership for Africa's Development was launched, how do you see its first decade?

NEPAD was a remarkable vision by African leaders. The past 10 years have provided increased confidence and hope about what is actually achievable in Africa. There has been a demonstration of resilience, with Africa leapfrogging onto a viable development path, alongside China — the so-called dragon economy — India and others. One senses a momentum that has been re-energized by NEPAD.

NEPAD is an African spirit for renewal, which will genuinely transform African economies. On the security front, we have never seen such a momentum [towards peace]. There is an increased commitment by African leaders to direct resources to their private sectors.

African civil society groups and the media often ask: Where are the tangible results?

Agreed. A lot of people would like to see the impact on the ground. But let's not forget that planning is as important as impact. Look at China. It took decades to plan and the results are coming only now. Planning is critical. And if you look at the qualitative aspects of the planning process in Africa, there is increased sensitivity to the NEPAD vision of good governance, transparency and accountability. We have come a long way from the 1960s, 1970s and 1980s, when civil society organizations had no say in the management of the affairs of the state.

What about avenues for civil society input into NEPAD priorities at the continental level?

We are working on structures focused on civil society organizations, to see how best to begin to engage them on a continental level. A very good example is our facilitation work with the African Union Commission on a continental programme of farmers' organizations. This enables farmers' organizations to begin to share their experiences. It serves as a platform for mutual learning and peer reviewing. They engage their own constituencies, and we are hoping that this continental platform can also be a conduit for channelling ideas to African leaders, for example on facilitating regional markets. But obviously we need to do more, by looking at other civil society organizations than just in agriculture.

Last year NEPAD held a transport and infrastructure summit, and at the UN General Assembly's review of the Millennium Development Goals (MDGs) we often heard African leaders emphasize the importance of infrastructure. How important is infrastructure in NEPAD's agenda?

African leaders are absolutely clear that infrastructure development is a priority, alongside agriculture, education, health and so forth, indeed, alongside all the MDGs. Infrastructure is an area that will fast-track regional integration, connecting people across borders. But it will also connect rural communities with urban areas and ensure that food flows from remote corners of a countryside into urban areas.

And the financing cannot just be from public sources, but must also come from the private sector?

The future growth of national African economies will be driven by the increased participation of the private sector. Equally important will be strengthening public-private partnerships, not just with the African private sector but also with the international private sector. Increasingly we are seeing that Africa is emerging as a destination for future investments by the international community. In the area of agriculture, Africa is one place which has a surplus of productive land. We are seeing interest in natural resources, whether it's oil or gas or other mineral products. The return on investments is much higher in Africa than anywhere else in the world. The challenge is ensuring that our national governments create a conducive environment for the private sector to thrive.

If we look at foreign investment flows to Africa, there's a clear preference for mining and oil, rather than agriculture and other sectors that may create more jobs. What can African governments do to attract more investments to non-mineral sectors?

National governments in Africa will need to provide incentives to investors so that they can create more job opportunities and their investments will spill over to the wider society. Africa has missed out by allowing the development of the extractive industries at the expense of industries that generate employment, whether agriculture or manufacturing or other industries.

Initially it often seemed that NEPAD was pitched to the Group of Eight and other donors, with expectations of higher aid flows. And although several G8 summits did pledge to increase aid, the global economic crash of 2008 further hampered that effort. Was that a wake-up call for Africa?

Within Africa there is recognition that development will not occur simply by relying on external donor support. Africa will need to mobilize its own domestic resources to develop itself. Africa has demonstrated that it has the capacity to generate its own resources. It will need to tend to issues of efficiency and effectiveness, to how the available resources within Africa are utilized. That may mean increasing capacity in the financial sector, improving fiscal policies and a whole range of other steps. Yes, global support is important, but so is what Africa can generate from within.

When NEPAD was launched, the main global forum on economic issues was the G8. Now there is the Group of 20, with China, India, Brazil, South Africa and others from the South participating. Is this shift giving Africa a stronger voice?

Africa needs to find increased space within this new architecture, especially the G20, to ensure that its voice is properly represented and that the diversities of the African continent are taken into account. This is part of the debate which the African Union will need to advance.