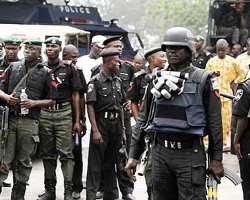 SSS spokesperson, Mrs. Marilyn Ogar, who made the disclosure in a statement, said the students have been released and returned to their school. The two students, whose identities were not disclosed, are 17 and 18 years old.

Ogar said they were arrested after investigations revealed they were behind series of panic text messages threatening that the radical Boko Haram sect would bomb certain locations in Abuja. The sect is responsible for a series of deadly attacks in northern Nigeria and Abuja.

“One of such messages alleged purported plans by Boko Haram to attack the Presidential Villa and National Assembly on the 28th October, 2011.

“However, following painstaking investigations, the Service succeeded in tracing it to two persons who issued the threat text message with the aim of inciting a frenzy of fear and panic in the society. Both suspects are boarding pupils in a secondary school in Kagara, Niger State.

“The two suspects claimed they were encouraged to send such panic messages by an advertorial they saw in a national news daily of 18th October, 2011 that requested members of the public to volunteer information on the activities of Boko Haram,” Ogar said.

The SSS further discouraged parents and guardians from proving GSM mobile phones to their wards saying, “Giving young people of that age access to such devices distracts them from their academics and impacts negatively on their overall performance as seen in the recently released WAEC and NECO examination results.”