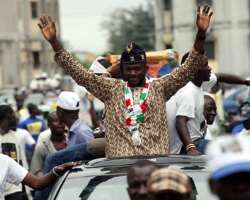 MR. IBRAHIM BABAJIDE OBANIKORO WAVES AT SUPPORTERS DURING A CAMPAIGN STOMP BEFORE THE ELECTION.
Listen to article

SAN FRANCISCO, November 02, (THEWILL) – The Action Congress of Nigeria (ACN) led government of Lagos State has been accused of playing politics with the local government election petition tribunal, following the inability of aggrieved candidates to file petitions challenging the victories of their opponents in the local government and councillorship elections conducted in the state on Saturday, October 22, 2011 statewide.

Particularly irked by the development is the Chairmanship candidate of the Peoples Democratic Party (PDP) for Ikoyi/Obalande LCDA, Mr. Ibrahim Babajide Obanikoro, who said he has been unsuccessful in his bid to file his petition challenging the victory of the Action Congress of Nigeria (ACN) Chairmanship candidate in that election, Hon. Adewale Razak Adeniji.

In a statement issued by his campaign office and signed by Campaign Manager, Mr. Gbolahan Obanikoro, the team said it is “wondering whether it’s a delay tactic to allow LASIEC properly manipulate and doctor results?”

The full text of the statement reads: “Our candidate Ibrahim Babajide Obanikoro the PDP candidate for Ikoyi/Obalende LCDA local council election has been ready to file his petition to the election tribunal since Wednesday October 26, 2011.

“However, all attempts to file as been unsuccessful as the Registrar of the tribunal is yet to be open. One would have expected the tribunal to open immediately given the controversial manner in which LASIEC conducted the elections, and the way its Chairman Hon. Justice Fatai Afolabi Adeyinka (Rtd) announced the results.

“We are wondering whether it’s a delay tactic to allow LASIEC properly manipulate and doctor results?

“Our team of lawyers led by Chief Bolaji Ayorinde (SAN) has written Hon. Justice Inumidun Akande to use her good office to fast track the opening of the registrar so petitions can be filed.”

Recall that Chairman of the Lagos State Independent Electoral Commission (LASIEC), Hon. Justice Fatai Afolabi Adeyinka had said the election petition tribunal had been constituted and advised aggrieved candidates to file their complaints there.

Justice Akande gave the advice on October 24, 2011, after he made the results of the election public.