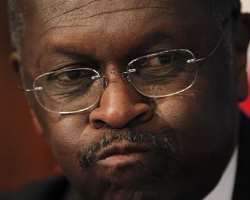 REPUBLICAN PRESIDENTIAL CANDIDATE HERMAN CAIN IS PICTURED BEFORE SPEAKING AT THE NATIONAL PRESS CLUB IN WASHINGTON, OCTOBER 31, 2011.
Listen to article

A crisis facing U.S. Republican presidential candidate Herman Cain threatened to escalate on Tuesday even as he declared himself the victim of a "smear campaign" over allegations of sexual harassment.

Cain spent the day attempting to clear up confusion over conflicting accounts he gave about the controversy, in which two women reportedly accused him of sexual harassment when he was head of the National Restaurant Association in the 1990s.

The lawyer for one of the women asked the association to release her from a confidentiality agreement to allow her to tell her side of the story, since Cain was telling his, The Washington Post reported.

"It's just frustrating that Herman Cain is going around bad-mouthing the two complainants, and my client is blocked by a confidentiality agreement," lawyer Joel Bennett told the newspaper.

"My client made a good-faith, honest complaint of sexual harassment," the attorney said in a separate interview on CNN.

Bennett said his client was still deciding whether she wants to go public if the restaurant association releases her from a confidentially agreement.

The National Restaurant Association said it had not been in contact with the lawyer.

""We have seen media reports that attorney Joel Bennett is publicly making requests on behalf of a former National Restaurant Association employee. Mr. Bennett has not been in contact with the Association. If we are contacted by Mr. Bennett, we will respond as appropriate," association spokeswoman Sue Hensley said in a statement.

Cain, asked in a Fox News interview if he would waive the confidentiality agreement so the woman could respond, said he could not answer yet because of legal implications and the need for consultations with his lawyers.

"I can't answer that right now. It's too soon" he said.

He said he did not think he violated the agreement because he did not mention the woman's name.

Cain acknowledged that a cash payout was made to a woman who filed a harassment claim, after saying on Monday he was not aware of a settlement.

Cain told CNN Headline News that at the time of the claims he did not consider the woman to have received a "settlement" but rather a separation "agreement."

"I didn't change my story. I just simply got the wording right and the difference between settlement and agreement is a difference for me," he said.

Cain said he was only aware of one woman who had made the accusation. News website Politico said there were two.

The accusations have cast a cloud over Cain's high-flying presidential campaign. He leads some Republican polls two months before voters begin to pick their 2012 nominee.

Perry quickly became the Republican front-runner when he launched his presidential bid two months ago, but he has lost support to Cain after a series of weak debate performances.

"The one thing you can say, as Perry's numbers went down a few months ago -- that support went directly to Cain. The question is, could it go back?" Mackowiak said.

Cain has caught fire as a conservative alternative to more moderate Republican Mitt Romney in the race to challenge President Barack Obama. Cain's signature 9-9-9 policy issue is a plan for a 9 percent personal income and corporate tax rate and for creating a 9 percent national sales tax.

But Iowa Governor Terry Branstad said he did not think the accusations would hurt Cain in his state.

"Iowans are pretty fair-minded people," he told reporters in the town of Pella. "I think Iowans will carefully look at the real situation and not jump to any conclusions."

The controversy has knocked Cain off his pro-jobs economic message and put him into a defensive crouch. But he said the furor has led to a big increase in fund-raising as donors send in their checks to him.

"It is a smear campaign," Cain said. "When they cannot kill my ideas like 9-9-9, they come after me personally."

Cain, 65, has gone from recalling very little about the sexual harassment allegations to remembering more details, such as one reason why the woman apparently complained.

"I referenced this lady's height and I was standing near her, and I did this saying, 'You're the same height of my wife,' because my wife is five feet tall and she comes up to my chin," Cain told PBS on Monday night.

He told CNN on Tuesday the woman had been making "huge claims about sexual harassment" and that he believed she had been paid three to six months of severance.

Analysts said Cain should tell a straight story with as many facts about the accusation as he can muster.

"For any high-profile candidate suffering under such an accusation, whatever facts there are that are known to the candidate should all be known immediately. That's not the way he's handled it so far," said Republican strategist Charlie Black.