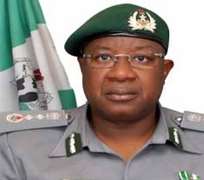 ABUJA, November 01, (THEWILL) – The Comptroller General of Customs Abdullahi Dikko Inde curiously announced on Tuesday that the service has recovered most of the illegally auctioned National Independent Power Project (NIPP) power components, barely a week before the expiration of the two weeks ultimatum handed down to it to recover the components by the Senate.

He told the Senate committee on Power that 15 out of the 22 containers allegedly auctioned had been recovered by the Customs.

The custom boss however assured the committee that the remaining seven containers would be recovered by Friday this week.

Recall that the committee gave the Custom service two weeks to recover and clear all power components from the ports belonging to the NIPP and directed that the equipment be moved to their various sites.

Committee Chairman Senator Aduda however directed that status of all contractors involved in the power project should be published for it to be able to follow up progress adding; “we cannot pay lip service to power projects again in the country.”

He said funding should not be a hindrance "but there should be provision for credit between the contractors and officials of NIPP as long as they would collect their money anytime government releases funds."

Nigeria, Africa’s most populous country has continued to suffer severe blackouts due to a combination of many self inflicted factors including poor infrastructure in its power sector, corruption, neglect and lack of planning.