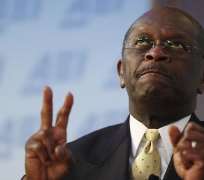 Republican Herman Cain denounced sexual harassment accusations from the 1990s as a "witch hunt" on Monday and broke into a gospel song to deflect what has become the toughest challenge of his U.S. presidential campaign.

Cain acknowledged he was accused of sexual harassment while heading the National Restaurant Association but declared that an internal investigation had cleared him of the allegations.

Politico's website reported on Sunday that two women employees had complained of sexually suggestive comments and gestures by Cain at the association.

The report, which came as Cain is riding high in the polls, could damage his surprisingly strong bid to be the Republican challenger to Democratic President Barack Obama in the November 2012 election.

"This bull's-eye on my back has gotten bigger," Cain told reporters at the National Press Club. "We have no idea the source of this witch hunt, which is really what it is."

Some experts said the allegations are trouble for Cain.

"The sexual harassment allegations will amount to the first in a drip, drip, drip of negative information about him," said Jennifer Duffy, a political analyst at the nonpartisan Cook Political Report.

Cain appeared totally at ease in addressing the controversy and even broke into a gospel song, singing a tune based on the hymn, "Amazing Grace," to demonstrate his Christian faith.

"I would be delighted to clear the air," he said. "Number One in all of my over 40 years of business experience, running businesses and corporations, I have never sexually harassed anyone."

"Number Two, while at the restaurant association, I was accused of sexual harassment, falsely accused I might add."

Cain said when the allegations arose, he rescued himself and the firm's general counselor and human resources official conducted an investigation that concluded the charges "had no basis."

Politico reported the women complained to colleagues and senior restaurant association officials that inappropriate behavior by Cain made them angry and uncomfortable.

The women ultimately left the trade group after signing agreements that gave them payouts and barred them from talking about their departures, the report said.

As for the charges of a financial settlement, Cain said he was unaware of a settlement and if there had been one, "I hope it wasn't for much, because I didn't do anything."

The former pizza executive tried to stay on message and move past the controversy. He spoke at length about his 9-9-9 tax plan and sought to clear the air over question marks conservatives have about whether he truly opposes abortion.

Cain, 65, has been an unlikely frontrunner, competing with former Massachusetts Governor Mitt Romney for the lead in polls of Republican voters with two months until primary elections start to choose the party's 2012 presidential nominee.

In a separate development, the Milwaukee Journal Sentinel reported on Sunday that Cain aides have funded his campaign with tens of thousands of dollars from a tax-exempt group, in what would be illegal donations.

Cain said he was not familiar with that report.
"UNCONVENTIONAL CANDIDATE"
The allegations could be critical in Iowa, where evangelical conservatives are a dominant voice and where Cain holds a narrow lead in the polls before the state's January 3 caucuses, the country's first 2012 nominating contest.

"The people have propelled my candidacy," Cain said of Republican skepticism of his candidacy. "The party may resist and I'm not saying that they are. I'm not the party favorite by some members of the party. I understand that."

"I think he needs to address it once and let the press overreact. Unless his alleged behavior was more serious than the story suggests, he should be able to deal with this, especially in a year in which everyone is focused on the economy," Fleischer said.

Cain also caused controversy with a Web advertisement last week that showed his chief of staff smoking. "Yes, I am an unconventional candidate," Cain said at the American Enterprise think tank. "Herman is going to stay Herman."

Republicans have struggled to find a frontrunner with conservatives seeking an alternative to the more moderate Romney. Minnesota Congresswoman Michele Bachmann, Texas Governor Rick Perry and now Cain have all tried to fill that role.

Howard Hyten from Austin, Texas said the issue is "not newsworthy for a presidential election."