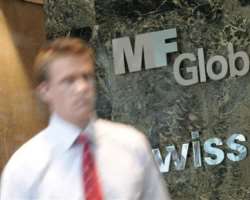 Corzine, 64, who once ran Goldman Sachs before becoming a U.S. senator and then governor of New Jersey, had been trying to turn the more than 200-year-old MF Global into a mini Goldman by taking on more risky trades.

But once regulators forced it to fully disclose the bets on debt issued by countries including Italy, Portugal and Spain, it rapidly unraveled with no buyers willing to step in.

MF Global's meltdown in less than a week made it the biggest U.S. casualty of Europe's debt crisis, and the seventh-largest bankruptcy by assets in U.S. history.

The company's shares plunged last week as its credit ratings were cut to junk. The Chapter 11 bankruptcy filing came after talks to sell a variety of assets to Interactive Brokers Group Inc broke down earlier on Monday, a person familiar with the matter said.

There were also signs that some of its customer accounts that are supposed to be segregated and protected from the rest of the business had suffered what regulators described as "possible deficiencies."

"Early this morning, MF Global informed the regulators that the transaction had not been agreed to and reported possible deficiencies in customer futures segregated accounts held at the firm," the U.S. Securities and Exchange Commission and the Commodity Futures Trading Commission said in a joint statement.

A bankruptcy proceeding led by the Securities Investor Protection Corporation would be the "most prudent course of action to protect customer accounts and assets," they said.

The New York Times reported later on Monday that federal regulators had discovered that hundreds of millions of dollars in customer money had gone missing from MF Global.

Less than $700 million was missing by late Monday, down from nearly $1 billion earlier, the paper reported on its website.

Regulators are looking into whether the brokerage used some of the money to support its own trades, the Times reported, citing unnamed sources.

MF Global was not immediately available to comment on the Times' report.

Regulators had expressed "grave concerns" about the viability of MF Global, which filed for bankruptcy only after "no viable alternative was available in the limited time leading up to the regulators' deadline," the company's chief operating officer, Bradley Abelow, said in a court filing.

One of the regulators that pressed MF Global, the CFTC, was unhappy with the brokerage's failure to give it the required data and records.

"(T)o date we don't have the information that we should have," said a source close to the CFTC.

In the end, regulators and markets reacted swiftly to MF Global's troubles, which may have been exacerbated by Corzine's affinity for risk-taking over the course of a career that took him to the top echelons of Wall Street and then into politics.

"They went for what would be a very profitable trade with European sovereign debt that obviously has blown up in their face, and brought the company down," said Dave Westhouse, vice president of Chicago retail broker PTI Securities and Futures.

RIPPLE EFFECTS
The bankruptcy is reminiscent of the collapse of Lehman Brothers in 2008 at the height of the financial crisis. But market participants said the impact from this collapse, far smaller, would likely be contained.

Still, MF Global's 2,870 employees, as well as trading counterparties, were left scrambling and confused on Monday, as MF Global halted its shares but did not file for bankruptcy until well after U.S. markets had opened.

Trading activity in gold, crude oil and grain futures slowed to a crawl as the bankruptcy forced a chaotic scramble to untangle trading positions.

"Ultimately it will have lost all confidence of its investor base," Michael Epstein, a restructuring adviser with CRG Partners, said of MF Global. "I'm not sure what restructuring it actually does. In some respects, it's a baby Lehman, in effect."

There was also uncertainty over Wall Street's exposure.

JPMorgan Chase & Co's exposure for a $1.2 billion syndicated loan to MF Global is less than $100 million, a source at the bank said. Deutsche Bank AG is listed in the court filing as a trustee for bondholders with $1 billion of claims. The banks declined to comment.

The impact on the markets should be smaller and nothing like when Lehman failed and hedge funds had money locked up with the firm for months, said Jeff Carter, an independent futures trader in Chicago.

At the Chicago Board of Trade, three traders wearing MF Global jackets were seen leaving prior to the opening of pit trading, and floor sources told Reuters they had been turned away after their security access cards were denied.

Back outside the Manhattan office, one MF Global employee said all he knew about the bankruptcy was what has been on TV. The company's HR department, meanwhile, was busy making calls withdrawing job offers it made in the past few weeks, according to a person familiar with the situation.

"A sale here is potentially the best outcome for employees because the company will continue to operate as opposed to slowly winding down," said Dan McElhinney, the managing director of corporate restructuring for Epiq Systems.

"I think there will be a lot of effort to tee up the sale pretty quickly here."

The New York Federal Reserve terminated MF Global as one of its primary dealers. CME Group Inc, IntercontinentalExchange Inc, Singapore Exchange Ltd and Singapore's central bank, among others, halted the broker's operations in some form except for liquidations.

THE ROAD TO BANKRUPTCY
Corzine was trying to transform MF Global from a brokerage that mainly places customers' trades on exchanges into an investment bank that bets with its own capital.

In the past week, the company posted a quarterly loss and its shares fell by two-thirds as investors focused on the euro zone bets and the effect of low interest rates, which hurt profits from its core brokerage operations.

MF Global scrambled through the weekend and into Monday to find buyers for all or parts of the company, while at the same time hiring restructuring and bankruptcy advisers in case nothing could be done.

In the court filing explaining what went wrong, MF Global pointed a finger at regulators. The bankruptcy was hastened by pressure from the CFTC, SEC and the Financial Industry Regulatory Authority, wrote Abelow, the COO.

FINRA ordered that its U.S. broker-dealer unit, called MFGI, boost net capital, and then reveal a $6.3 billion stake in short-term debt from European sovereigns with "troubled economies," he wrote.

"Concerned about the events of the past week, some of MFGI's principal regulators -- the CFTC and the SEC -- expressed their grave concerns about MFGI's viability."

MF Global in the filing did not elaborate on the regulators' concerns or the reasons behind them.

However, federal bankruptcy law may limit any possible severance payouts.

First-day hearings in the case were scheduled for Tuesday at 3 p.m. in U.S. Bankruptcy Court in Manhattan. Among other things, MF Global is expected to seek permission from Judge Martin Glenn to use cash collateral to keep operating its business, court papers show.

CLOCK TICKING
By filing for bankruptcy, MF Global freezes the value of its free-falling notes and gives potential suitors a clearer picture of the losses they would be taking on, said Bill Brandt, CEO of Chicago-based turnaround firm Development Specialists Inc.

If a sale is in the offing, he added, the buyer may be a European bank or sovereign government, as such entities would be particularly keen on stopping the slide and maximizing the value of the notes.

"The real question is how many assets will be left to transfer," said Niamh Alexander, an analyst at Keefe, Bruyette & Woods. "Customers might move very quickly and it may be that every hour that passes shrinks the portfolio of assets that could be transferred" to a buyer, she said.

After dividends the private equity firm has received for its preferred shares, J.C. Flowers' net exposure to MF Global is $47.8 million, according to a source familiar with the matter. The firm declined to comment.

The broker's deeply distressed 6.25 percent notes maturing in 2016 fell 4 cents to 46 on the dollar, according to the Trace, which reports bond trades. The price had earlier fallen as low as 15 cents.