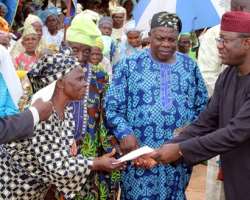 Elderly citizens of 65years and above in Ekiti State will henceforth receive a monthly stipend of #5000 under the State Social Security Scheme as the State Governor, Dr. Kayode Fayemi flagged- off payment on Monday .

The programme, which is the first in the country, is in fulfillment of the Governor's campaign promises to cater for the aged in the state and supplement their livelihood.

Speaking at the flag-off ceremony at Ise Ekiti, Dr. Kayode Fayemi said  the scheme was designed to provide for the aged and significantly reduce old age poverty in the State.

The governor who personally handed over checks to some of the elderly citizens at the flag off, said the money would be paid between 23rd and 25th of every month (the pay day for workers in the state)

Fayemi said that the idea of government's support for the elderly was informed by the high unemployment rate in the country which has denied many elderly citizens the usual support they would naturally get from the children they had labored to train through schools.“It is painful to note that across the length and breadth of Africa, poverty visibly walks on the street with impunity. He added.

Fayemi said: “Of the many identifiable strands of poverty that is confronting the developing world is the one associated with old age when one's strength and vitality is lost and the bones are irredeemably weakened”, he noted.

advertisement
The Governor who recalled that a similar welfare programme was once in place to ensure that life was abundant and enjoyable for old people before the programme was eroded by “civilization”, leaving everyone to fend for themselves, lamented that ”abject poverty, diseases, emotional breakdown and frustrating social disaffections” had greeted the vulnerable citizens.

While reiterating the commitment of his administration to the welfare of citizens, especially the aged, Fayemi assured that his administration would continue to initiate programmes that would elongate their life span and make make it less stressful and agonizing.

He added that government would vigorously pursue and pay more attention to its free health programme for the elderly and other vulnerable groups in the society.

The Governor who disclosed that the stipend would be paid by the 25th of every month, said the programmed would be reviewed every six months in order to accommodate  other qualified indigent elders in the society.

He assured that government would ensure legislative backing for the sustainability of the initiative.

In her remarks, the Commissioner for Labour, Human Capital Development and Productivity, Mrs. Bunmi Adelugba said the scheme cuts across all and sundry above regardless of their political or religious affiliation while non-indigenes who have lived in the state for at least three consecutive years are also eligible.

She added that the payment would begin simultaneously in all the sixteen local government areas of the state.

Responding on behalf of other beneficiaries, 89 year-old Pa Lateef Idris commended the State Government for the initiative and appealed for the sustenance of the scheme.