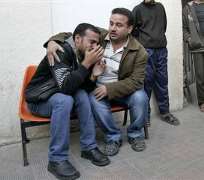 Violence between Israel and Gaza militants flared anew Sunday after Egypt said it had brokered a truce to end attacks that have killed 10 Palestinian gunmen and an Israeli civilian in the past five days.

The frontier was largely quiet for most of the day, and a ceasefire appeared to be taking hold until Israeli aircraft attacked Palestinian militants who the Israeli military said were about to fire rockets from the southern Gaza Strip.

Medical officials in the enclave said one man was killed and another wounded, identifying them as members of the Democratic Front for the Liberation of Palestine, a group that rarely launches attacks against Israel.

Militants launched at least two more rockets that fell in open areas in Israel close to the Gaza Strip, a military spokeswoman and Israeli media said.

Islamic Jihad and two smaller factions have claimed responsibility for rocket strikes against Israel since Wednesday. Islamic Jihad has close ties with Iran and has chafed at the rule of rival Hamas Islamists in the Gaza Strip.

"If the (Israeli) aggression is stopped, we will abide by the calm," said Abu Ahmed, leader of Islamic Jihad's armed wing.

Israel and Palestinian militants have used such language in the past in ceasing fire while stopping short of acknowledging any formal truce agreement.

"If someone rises up to kill you, kill him first," Israeli Prime Minister Benjamin Netanyahu said in public remarks several hours before the latest air strike.

But he said Israel was "not eager for escalation."
The military later eased restrictions on large gatherings and said schools could reopen Monday after they had been shut Sunday when hundreds of thousands of civilians within 40 km (25 miles) of Gaza were urged to stay indoors.

Catherine Ashton, the European Union's foreign policy chief, expressed concern in a statement she issued in Brussels and urged "all sides to respect the ceasefire brokered by Egypt."

DEADLY ATTACKS
The violence began when residents of Israeli suburbs south of Tel Aviv were jolted awake Wednesday night by sirens usually sounded in towns and villages closer to the Gaza Strip.

The alert was triggered by what Israeli security sources said was an upgraded long-range Grad rocket that struck harmlessly near the Israeli port city of Ashdod, leading to an Israeli air strike Saturday that killed five top Islamic Jihad militants in a Gaza training camp.

Five other militants have died in subsequent air attacks.

One of some 30 rockets and mortar bombs fired at Israel killed an Israeli man in the city of Ashkelon. Two other people were wounded.

"My interpretation is that these guys (Islamic Jihad) are keen to show off their clout, which has been built up recently," Yosef Kupperwasser, director-general of Israel's Strategic Affairs Ministry, told Reuters.

Islamic Jihad released images of what it said was the firing by its men of a truck-mounted multiple rocket-launcher, a platform not previously seen in Gaza.

Israel says Gaza arsenals have been boosted by gun-running from Libya since the fall of its ruler, Muammar Gaddafi.

The violence erupted after weeks of a relative lull surrounding a prisoner swap on October 18 in which Israel released 477 Palestinian prisoners in exchange for Gilad Shalit, an Israeli soldier held by Hamas since 2006.