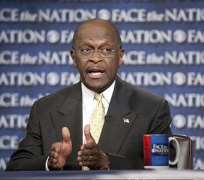 The women ultimately left the trade group after signing agreements that gave them financial payouts to leave the association and barred them from talking about their departures, the report said.

The report could damage Cain's surprisingly strong bid to win the Republican nomination to challenge President Barack Obama in 2012.

Cain, the former CEO of Godfather's Pizza, has taken a lead in many opinion polls of Republicans in recent weeks despite never having held public office. A recent poll had him ahead of his main rival former Massachusetts governor Mitt Romney in Iowa, which holds the first of a series of state-by-state contests to choose the Republican party's candidate.

Politico said at least two female employees, whom they have identified but decided not to name, complained to colleagues and senior association officials that inappropriate behavior by Cain made them angry and uncomfortable.

Politico said its story was based on multiple sources.

"Fearing the message of Herman Cain who is shaking up the political landscape in Washington, Inside the Beltway media have begun to launch unsubstantiated personal attacks on Cain," his campaign spokesman J.D. Gordon said in a statement. He said Politico was "dredging up thinly sourced allegations."

The Cain campaign also responded to Politico on Twitter. "From Team HC: Sadly we've seen this movie played out before. Mr. Cain and all Americans deserve better," the campaign tweeted.

Asked by Politico about the allegations, Cain said he has "had thousands of people working for me" at different businesses over the years and could not comment "until I see some facts or some concrete evidence."