Japan Intervenes To Tame Soaring Yen Ahead Of G20 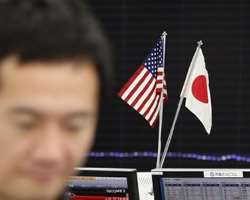 Japan intervened to weaken the yen after the currency hit a record high against the dollar on Monday, saying it acted to counter speculative moves that did not reflect the health of the Japanese economy.

The dollar spiked after the intervention as much as 4 percent past 79 yen from around 75.65 yen. The dollar touched a record low of 75.31 yen earlier on Monday.

Finance Minister Jun Azumi said Tokyo stepped into the market for the second time in less than three months on its own at 10:25 a.m. local time (0125 GMT) and would continue to intervene until it was satisfied with the results.

"I have repeatedly said that we would take decisive steps against speculative moves in the market," Azumi told an ad-hoc news conference.

Azumi would not comment on the size of the intervention, but one trader said the authorities were intervening "quite persistently."

"My sense is that they might not quit very easily," a trader said. The trader added, however, that dollar/yen may start to become heavy at levels above 79 yen.

Tokyo's second foray into currency markets since its record 4.5 trillion yen selling intervention on August 4, follows weeks of warnings by government and central bank officials that their patience with the currency's strength was wearing thin.

Even though the yen's exchange rate when measured against a trade-weighted basket of currencies and adjusted for inflation is not far from its 30-year average, it has been trading at much stronger levels against the dollar than one assumed by Japanese exporters in their earnings projections.

Last Thursday, acting in part out of concern that the yen's impact on corporate profits could derail Japan's recovery from the March earthquake and tsunami, the Bank of Japan eased its monetary policy by boosting government bond purchases.

But the easing failed to take the pressure off the yen, which continued to climb against the U.S. dollar -- underpinned by investors seeking relative safety in the currency from the European debt crisis.

"It was very good timing. The BOJ has prepared the ground by easing last week. Speculators' yen-buying position has piled up, and intervention is most effective in such cases," Ikeda said.

"This will likely be one-off intervention, but I think the government wants to stop the yen's strength, which is out of sync with gradually improving global economic fundamentals.

"The dollar/yen will unlikely fall back to the record low hit earlier today for some time."

Japanese Prime Minister Yoshihiko Noda and Azumi will head to the Group of 20 summit in Cannes, France later this week and Tokyo has been keen to win its international partners' understanding for its problems with the yen.

Azumi said that while Monday's intervention was a solo act he was in a continuous contact with his international partners.

"I have been frequently in contact (with other countries) ... I have always conveyed Japan's stance and interests at senior official levels," he said.

Since September 2010, Japan has now intervened three times on its own and once jointly with other G7 rich nations to weaken the yen. But the effects of past intervention have proved fleeting in the face of steady demand from nervous investors seeking highly liquid and relatively safe assets such as Japanese government bonds.

This has been a source of deepening frustration for Japanese officials, who argue that a yen rally is one problem too many for a nation grappling with a nuclear crisis, a $250 billion post-quake rebuilding effort and ballooning debt.