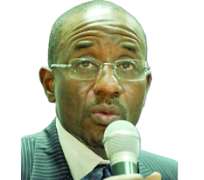 Governor, Central Bank of Nigeria (CBN), Sanusi Lamido Sanusi yesterday said that the present political structures of Nigeria are too cumbersome and economically wasteful to guarantee rapid development of the country.

Sanusi who spoke as the Guest Speaker on the occasion of the presentation of professor Adamu Baike's  book, 'Against All Odds' at Arewa House, Kaduna noted that the present 36 States are spending 96 percent of their revenues to pay salaries of their respective civil servants in an economy that is to develop on a long term basis, and posed a rhetorical question, 'do we need 36 States, do we need the number of ministries that we have'?

He also pointed out that the Federal government is spending 70 percent of its total revenue to pay workers' salaries as well as taking care of the overhead cost, maintaining that it has denied the growth of some vital sectors of the socio-economy of the nation, leaving only 30 percent for 150 million Nigerians.

The CBN boss whose paper presentation was entitled, 'Re-Invigorating Education In Nigeria', lamented that  there are 71, 000 Nigerian students in Ghana who are paying not less than 155 billion naira as tuition annually, compared with the annual budget of 121 billion naira for the entire federal university education in Nigeria.

According to him, 'ltimately we will have to be confronted with the task of taking very difficult steps in looking at the political structures that we have, do we need 36 States, do we need the number of ministries that we have, it is an economy in which States spend 96 percent of their revenues to pay their civil servants, an economy that is likely to be developed in the long term.?

'I don't know how many people know that 70 percent of the total revenue of the Federal government is spent paying salaries and over head, and leaving the remaining 30 percent for 150 million Nigerians.

'For example, according to a newspaper account, and quoting the chairman, committee of governing councils of Nigerian Federal Universities: 'there are 71, 000 Nigerian students in Ghana who pay not less than 155 billion naira as tuition annually, compared with the annual budget of 121 billion naira for the entire federal university education in Nigeria. Findings placed Nigeria third on the list of countries with the highest number of students studying overseas.

'The poor state of education is also manifested in dearth of functional libraries, poor state of learning infrastructure, limited access to recent advances in various spheres of knowledge, and longer time required to complete a programme. Others include modality of teaching with instructional materials and facilities, lack of space for admission and irregularity in academics calendars of tertiary institutions arising from incessant strike actions embarked upon by both academic and non-academic staff union.

'In emerging economy like Nigeria, a well designed education policy should be an integral part of its development strategy; the present economic strategy should include measure to invest in human capital that facilitates in upgrading of industries, and ginger the economy to attain utmost resources utilization.

'It is not enough to simply lament the tragedy, let alone treat it with kid gloves, we completely agree with the House of Representatives that a state of emergency should be declared in our education sector now. Further procrastination on this very matter will inflate impracticable and irreversible damage to the nation.'