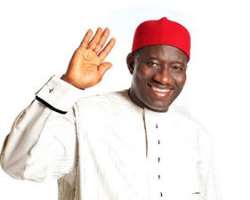 By Emmanuel Aziken, Political Editor
RETREATS occur when combatants pull back to re-strategise for future confrontation with formidable opponents. For President Goodluck Jonathan and his transformation team now faced with the daunting economic, security and infrastructure challenges of the country, the 13th and 14th of October were two days for their own retreat ahead of battle.

For the two days, the President was essentially locked in with his Economic Management Team and associated stakeholders for a presidential retreat with the theme 'Economic Development and Job Creation'.

The Administration's delegation to the Retreat was personally led by President Jonathan, and included the Vice President who is chairman of the National Economic Council, the Secretary to the Government of the Federation, Senator Anyim Pius Anyim, Ministers, members of the Economic Management Team, and Heads of Parastatals and Agencies.

*President Goodluck
In a significant effort at wooing the support of the legislative branch, the government also involved the President of the Senate, Senator David Mark and Speaker Aminu Tambuwal of the House of Representatives as participants at the retreat.

Given the difficult legislative and structural impediments ahead of the President's transformation team, it was not difficult to see why the presidency brought the National Assembly principal officers and the Governors into the picture.

For one, the National Assembly would be expected to give legislative approval to some of the structural and fiscal measures that would enable the quick realization of the objectives of the transformation team.

The Governors are equally key stakeholders who could play as spoilers on key administration goals. They have in recent times expressed their opposition to the establishment of the Sovereign Wealth Fund.

Given the administration's strategic aim of putting the private sector at the driving seat of the national economy it was not surprising that key figures in the private sector were invited to the retreat. Among those present were Alhaji Aliko Dangote, Mr. Jim Ovia, Femi Otedola, Wale Tinubu, Oba Otudeko, Rabiu Isiaku, Tony Elumelu among other prominent names in the business sector.

The gathering was particularly aimed at brainstorming on the strategies that could be adopted to waken Nigeria's latent capabilities as a nation, and transforming same into nudging the country to take its position as the economic and political Giant of Africa.

Welcoming participants to the retreat, the Coordinating Minister for the Economy/Minister of Finance, Dr. Ngozi Okonjo-Iweala, stated that the expected outcomes of the Retreat were to:

•Identify and prioritize the resolution of critical challenges facing key sectors of the Nigerian economy;

•Identify special areas of focus and strategies to create jobs;

• Propose specific recommendations on how to unleash the potential of each of the identified critical sectors;

•Identify key indicators to focus on to improve Nigeria's competitiveness; and

Collier is a specialist in the political, economical and developmental predicaments of poor countries whose book, The Bottom Billion: Why the Poorest Countries are Failing and What Can Be Done About It is a key reference on the failures of African and third world economies.

Other resource persons drawn from the Public and Private Sectors, as well as the Academia, spoke on:

•Medium to Long-term Strategic Perspectives on Nigeria's Vision and the Transformation Agenda;

•National Competitiveness and Development: the Role of Information and Communications Technology.

At the end of the retreat the key outcomes agreed as articulated in a communiquÃ© issued by Dr. Okonjo-Iweala read thus:

KEY OUTCOMES:
After extensive and participative deliberations during the plenary and break-out sessions, the Retreat's participants agreed on the imperative of moving beyond discussing the challenges to economic growth and job creation, to delivering key priority outcomes.

There was clear consensus around several key messages, including:

• The President's charge for both the Public and Private Sectors to imbibe a positive and proactive attitude to delivering on the required reforms, as this attitude was as important as the reforms themselves.

This transformative attitude was best represented by the twin mantras of 'Just Do It' (that is, moving from deliberation and consensus-building to execution and delivery), and 'Never Again' (that is, that previous mistakes of economic mismanagement and missing past opportunities to realize Nigeria's potential should not be repeated).

• The Administration's commitment to support the Private Sector as it reverts to its traditional role of driving economic growth and development, in line with the Transformation Agenda.

This commitment was to be rapidly expressed in tangible reforms to improve the business environment for Nigerian and foreign investors, and provide a level playing field. Specific policy measures were to be targeted at:

-   Enhancing economic justice through the responsible stewardship of natural resources for present and future generations;

-  Enhancing critical infrastructure by deliberately sequenced reforms, such as incrementally achieving reliable and adequate electricity supply; as aptly stated, 'No Power, No Future' in terms of economic growth and development;

- Accelerating the implementation of key reforms including the Power Reform Roadmap, Ports Reforms, the Agriculture Transformation Action Plan, Downstream Deregulation, Land Use Act reform, and the passage of the Petroleum Industry Bill into law;

-   Active engagement through economic diplomacy with neighboring ECOWAS nations to address trade imbalances and concerns within the framework of the Common External Tariff.

• The Private Sector's commitment to support the Administration's Transformation Agenda and ongoing reforms. This commitment was immediately evidenced in the overwhelming support of Private Sector participants at the Retreat for both the establishment of the Sovereign Wealth Fund and the proposed Downstream Deregulation.

• Regularly engaging with segments of the Private Sector through such periodical Retreats to deepen this strategic partnership for success, as well as to agree on and implement concrete measures that will unleash the full potential of each sector.

The Economic Management Implementation Team is take the outputs and convert these into work-plans, action points and key performance indicators, with appropriate monitoring mechanisms to be established to measure the achievement of key deliverables. Other policies, and their implementation modalities, were to be announced by the Government in due course.